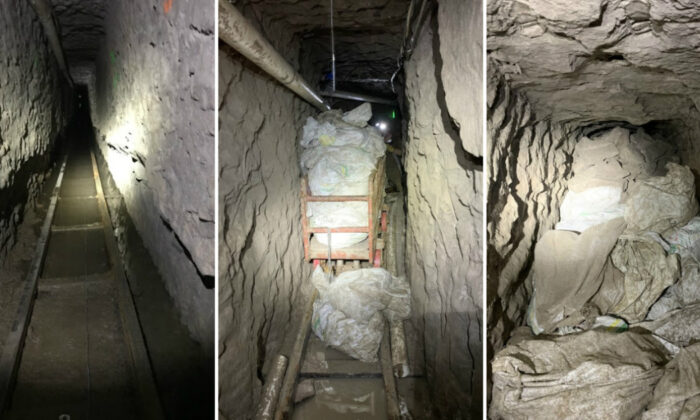 U.S. Border Patrol San Diego Sector and partners discovered what appears to be the longest illicit cross-border tunnel known to exist along the Southwest border, designed to move large packs of drugs, according to a CBP announcement on Jan. 29, 2020. (U.S. Customs and Border Protection)
US News

Smuggling Tunnel Discovered on US–Mexico Border is Longest Ever in Southwest US: CBP

The longest cross-border smuggling tunnel ever found along the southwestern U.S.-Mexico border was discovered after a “challenging” multi-year operation, U.S. authorities announced on Jan. 29.

U.S. Customs and Border Protection (CBP) announced in a news release that the illicit cross-border tunnel was first discovered in August 2019 and stretched more than three-quarters of a mile from an industrial site in Tijuana, Mexico, to the San Diego area.

At around five and a half feet (1.68 meters) tall and two feet (0.61 meters) wide, the tunnel featured an extensive rail and cart system, forced air ventilation, high voltage electrical cables and panels, an elevator at the tunnel entrance, and an elaborate drainage system.

The tunnel was mapped from Mexico by members of the SDTTF. They found it travels north into the U.S. bending slightly west and extends 4,068 feet (1,239 meters) from the border, but measures 4,309 feet. (1,313 meters) in total.

It went under several warehouses in the Otay Mesa area, where sophisticated tunnels have typically ended, and extended into open fields.

While no arrests or drug seizures have been made since the tunnel’s discovery, agents have expressed their relief that it will no longer be used. By federal law, U.S. authorities must fill the U.S. side of tunnels with concrete after they are discovered.

“I am thrilled that this high-level narco-tunnel has been discovered and will be rendered unusable for cross-border smuggling. I am proud of the tremendous efforts of the Tunnel Task Force and our agents,” said USBP Deputy Chief Patrol Agent Aaron M. Heitke.

“The investigation continues, and I am confident that our hard work and dedication to uphold the law will lead to future arrests and seizures.”

Meanwhile, Cardell T. Morant, acting special agent in charge of Homeland Security Investigations in San Diego, said the tunnel’s discovery is a cause for concern.

“The sophistication and length of this particular tunnel demonstrates the time-consuming efforts transnational criminal organizations will undertake to facilitate cross-border smuggling,” he said.

The tunnel raised questions about the effectiveness of President Donald Trump’s border wall, which stretches several feet underground in the area. The tunnel was found at about 70 feet underground, well below the wall foundation.

Authorities have found 15 sophisticated tunnels on California’s border with Mexico since 2006, with features including lighting, ventilation, railway tracks, and hydraulic lifts. The tunnels are concentrated in an area where clay-like soil is conducive to digging, and industrial warehouses provide cover.

The latest tunnel was discovered by Mexican authorities in a Tijuana parking lot for cargo trucks, next to the city’s airport.

Authorities didn’t say who they believe was behind the tunnel, but the area has been a stronghold of Mexico’s Sinaloa cartel. The cartel’s longtime leader, Joaquin “El Chapo” Guzman, was sentenced to life in U.S. prison in July.