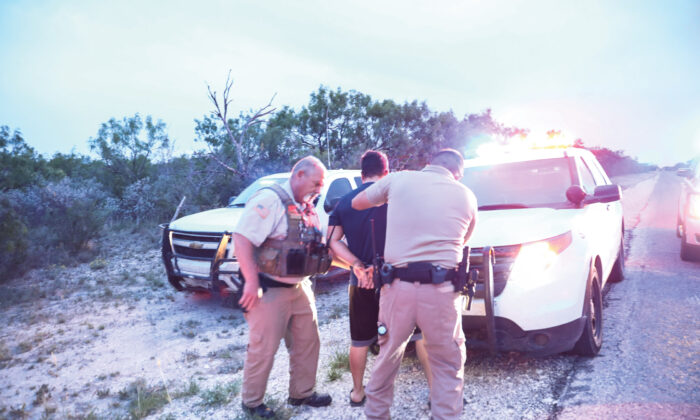 In Texas, drivers are recruited on social media—lured by the promise of quick cash—to haul illegal aliens to San Antonio, Houston, Austin, or Dallas. One U.S. citizen-driver told The Epoch Times he was promised $1,000 per person for the seven Guatemalans he was moving from Kinney County to San Antonio.

The Del Rio region of the Texas–Mexico border is largely ranchland, with small communities dotted in between and linked by rural roads.

The driver will have a general idea of the pickup location, and as the illegal aliens get close, the communication will ramp up, according to a senior Homeland Security Investigations (HSI) official in the Del Rio region. HSI is the investigative arm of Immigration and Customs Enforcement (ICE).

“There’s a foot guide that’s usually used to bring the noncitizens across the international border,” the official told The Epoch Times on June 4.

“Sometimes, they’ll drop a pin on a GPS map that coordinates their location to be picked up. And then the event starts from there, where they’re loaded up into a vehicle and try to conceal and evade law enforcement. And they’re transported to whatever parts of the country have been prearranged.”

The foot guide often communicates directly with the driver, but sometimes there’s a third party coordinating the smuggling from Mexico or from within the United States, the official said.

So far this fiscal year (since Oct. 1, 2020), the San Antonio HSI office has initiated more than 320 criminal investigations related to human smuggling. In fiscal 2020, the office initiated almost 450 smuggling probes.

In one of the more egregious smuggling cases in recent months, a 24-year-old Austin man was charged with transporting illegal aliens resulting in death on March 15. The driver, Sebastian Tovar, failed to stop when a Texas state trooper attempted to pull him over for speeding near the border town of Del Rio, according to court documents.

“Tovar led the trooper on a chase for approximately 50 miles, at times reaching speeds over 100 miles per hour,” the documents state. “Traveling north into the southbound lane on Highway 277, Tovar collided with another vehicle head-on, resulting in the death of eight illegal aliens that had been in Tovar’s pickup truck.”

The driver and passenger of the vehicle that Tovar collided with were hospitalized in stable condition.

A second vehicle carrying 12 illegal aliens was stopped near the crash site.

Tovar, who remains in federal custody, faces up to life in federal prison if convicted, according to the Department of Justice.

The minimum sentence for smuggling is generally two years of prison time for each person the individual smuggled. Sentencing escalates depending on injury, death, and prior convictions.

“The cartels are now reaching out—because they need more labor—to cities such as Houston, San Antonio, and others, using social media, and promising lots of money,” he said.

McCraw showed a recruitment video on TikTok that flashed wads of cash, and the words “Drivers needed!!! DM to make some racks,” with bouncy music reminiscent of the neighborhood ice cream truck playing in the background.

“Mexican cartels have always done a very good job, unfortunately, of seeking and recruiting our children along the Texas–Mexico border to support their cartel operations, smuggling operations,” he said.

Uvalde County Sheriff Ruben Nolasco said the majority of drivers he has dealt with are U.S. citizens out of Austin, while many of the vehicles are stolen.

“And they’re young adults—early-20s, to probably possibly mid-30s. And there’s no respect for life or property,” he said. “It’s very dangerous out here now.”

Uvalde is currently plagued by high-speed pursuits, as two of the longest highways intersect in the city. Nolasco estimates there’s an average of two pursuits a day in his county, which has ramped up from about two per week in January, when the border crossings started to spike.

In the region, Texas state troopers have recorded a jump in vehicle pursuits, from seven in January to 50 in April.

On June 13, a U-Haul truck containing 27 illegal aliens was stopped near a highway checkpoint north of Laredo, according to Customs and Border Protection (CBP).

The agency said the cargo area was unventilated and had reached 106 degrees Fahrenheit. The illegal aliens were from Mexico, Guatemala, and Honduras, while the driver and passenger were U.S. citizens, according to CBP. All were placed under arrest pending further investigation.

On June 10, 33 illegal aliens were discovered locked inside a U-Haul truck near a McDonalds near Big Bend, Texas—12 were subsequently transported to regional hospitals.

HSI’s focus is to look at the big picture and find a way to dismantle entire operations, the senior agency official said. Agents will look to raise a state smuggling prosecution to the federal level if it’s tied to a larger criminal enterprise or linked to a current investigation.

“We try and build the investigation to identify the infrastructure of the criminal organization, identify the different players that are involved, any assets that they may have, that are used—vehicles or load houses, stash houses—and also any proceeds that they’re gaining from that crime,” he said.

“I hereby direct DPS to use available resources to enforce all applicable federal and state laws to prevent the criminal activity along the border, including criminal trespassing, smuggling, and human trafficking, and to assist Texas counties in ther efforts to address those criminal activities,” Abbott’s declaration states.

Abbott also launched a website to raise money for the continued construction of a border wall in Texas.