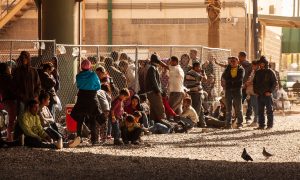 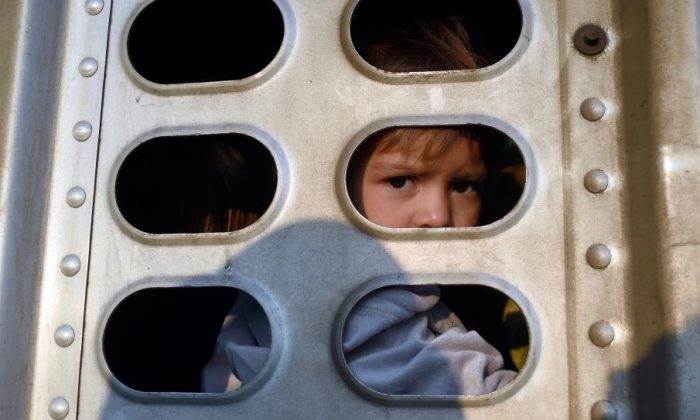 A girl taking part in a migrant caravan looks out from the trailer of a truck along the Irapuato-Guadalajara highway in the Mexican state of Guanajuato, on Nov. 12, 2018. (Alfredo Estrella/AFP/Getty Images)
Politics

Smugglers Using Kidnapped Children to Get Migrants Into US Illegally

Nielsen told Fox News that the practice essentially uses the kidnapping and passing around of children as a way to skirt U.S. immigration laws.

When an adult enters the country with a kidnapped child, it allows them to lie and claim they are a family, and use immigration laws that are lenient towards families to get released by authorities into the interior of the United States.

“The smugglers are more active than ever before at advertising how to come into this country with a child. We’ve broken up so-called ‘child recycling rings,’ if you can believe it, in the last couple months, which is where smugglers kidnap a child, they give it to an adult to cross the border, [and they] present themselves as a family.

“Once they get in, because, as you know, we can only hold families for 20 days, they send the child back, and bring the child back with another family—another fake family, [meaning] another adult,” Nielsen told Fox News.

On March 29, Nielsen issued a statement to the public about the practice of using children to gain entry.

“Smugglers and traffickers know that our laws make it easier to enter and stay if you show up as a family.  So they are using children as a ‘free ticket’ into America, and have in some cases even used kids multiple times—recycling them—to help more aliens get into the United States,” she wrote, via the DHS website.

Nielsen says that flaws in U.S. immigration laws have allowed and encouraged this practice.

“This goes well beyond politics. We must come together to find a way to tackle the crisis and reduce the flows so children are not put at risk. Any system that encourages a parent to send their child alone on this terrible journey—where they are exploited, pawned, and recycled—is completely broken,” Nielsen added.

Nielsen travelled to Honduras on March 27 to meet with government officials from Honduras, Guatemala, and El Salvador, and signed a historic Memorandum of Cooperation multi-country agreement on border security cooperation.

While there, she also met with the President and first lady of Honduras to discuss solutions to human trafficking, child smuggling, and the motivation behind people that join migrant caravans.

Our system and facilities were never structured to withstand the current influx of immigrants. @DHSgov expects illegal migrant encounters at the border will reach nearly 100,000 in March.

Just before she traveled to Honduras, Nielsen met with senior Mexican officials on March 26 in the United States, and also discussed solutions to the migration, as well as security, smuggling, and trafficking.

On March 28 Nielsen wrote a four-page letter to Congress, obtained by CNN, urging them to address the situation at the border.

Nielsen wrote that the Department of Homeland Security (DHS) apprehended or encountered 75,000 migrants in February, the highest in over a decade. She projected that the number would reach nearly 100,000 in March.

She explained that DHS resources are stretched, and the agency cannot handle the huge caravans of people that are now frequently showing up at the border.

Nielsen also addressed the many children in the custody of DHS agencies. She said that number is 4,700. Most are in custody with family, but 1,200 are unaccompanied alien children. She also said many of these children are showing up at the border sick. She was especially concerned about the diminishing facilities available to house children within both the DHS agencies and the Department of Health and Human Services.

She summarized the situation of a lack of facilities, personnel, support, and an ever increasing flow of people and said “we are witnessing the real-time dissolution of the immigration system.”

In the letter she pleaded with Congress to provide additional resources so that the immigration system is not completely overrun, while suggesting changes in the law that can both discourage migrants from making the long journey and facilitate asylum applications from the applicant’s home country.

She urged bipartisan support from Congress and restated the gravity of the matter: “This is one of the most serious crises the Department of Homeland Security has ever faced, and we need your help.”