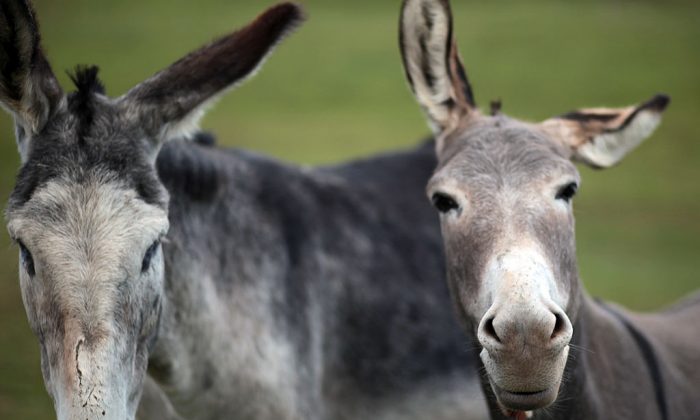 A pair of donkeys. (Photo by Matt Cardy/Getty Images)
Africa

Smugglers Try to Use Donkeys to Drag Mercedes-Benz Across Border

Police found four donkeys trying to drag a Mercedes-Benz across a border into Zimbabwe. The car smugglers had apparently abandoned the attempt after the donkeys couldn’t continue to drag the car through the sand.

The car was a Mercedes-Benz C220. The vehicle and donkeys were found still in South Africa. The animals were unable to pull the car through the sand and across the dry Limpopo River into Zimbabwe.

This isn’t the first time that smugglers have employed donkeys to smuggle cars. BBC reporter Pumza Fihlani gave his theory that the thieves tried to drag the car through the sand instead of drive it across the border because turning on the car to drive it would activate tracking devices.

“The suspects were using donkeys to pull the car across the river‚ but our members were just in time to pounce on them after the donkeys were apparently no longer able to pull it through the sand,” Police Brigadier Motlafela Mojapelo said, as reported by The Telegraph.

In December, police encountered a similar car theft. That time, donkeys tried to drag a vehicle through water to cross the border. The thieves fled once the police came, and the donkeys wandered off.