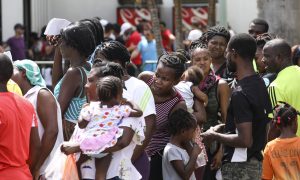 Thousands of Africans, Haitians Heading to US Through Latin America
0 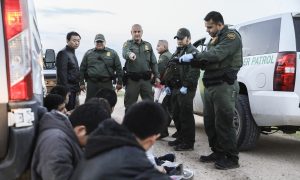 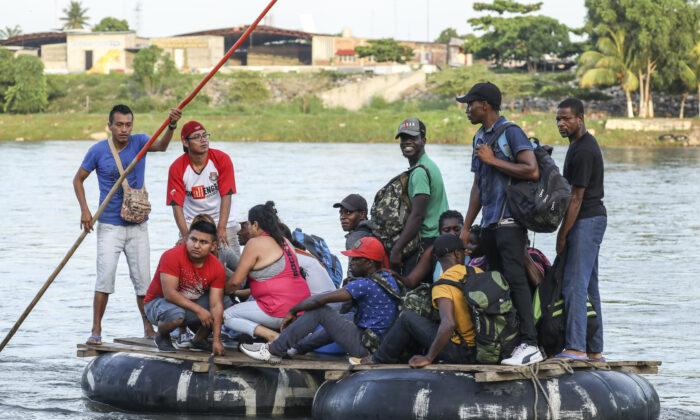 A group of 10 Haitians illegally cross the Suchiate River on a tube raft from Tecun Uman, Guatemala, to Hidalgo City, Mexico, on June 28, 2019. They are bound for the United States. (Charlotte Cuthbertson/The Epoch Times)
US News

Smugglers Look for New Populations to Bring Across US Border

WASHINGTON—As the number of family units from Central America dwindles, due to new policies taking effect at the U.S.–Mexico border, smuggling organizations are looking elsewhere for new business.

“They saw that we were making progress towards stemming the flow of illegal immigration from the Northern Triangle countries—really taking billions of dollars out of their pockets—and they shifted,” said Mark Morgan, acting commissioner of Customs and Border Protection (CBP), during an event with the Center for Immigration Studies on Dec. 20.

He said cartels and smuggling organizations are shifting towards supporting migration from more far-flung countries, as well as Mexican nationals.

“I mean Indians, Africans, Haitians … the list goes on and on and on,” Morgan said.

Del Rio, Texas, is a popular entry point for Africans and Haitians crossing illegally into the United States.

During the first week of December, agents in Del Rio apprehended 56 illegal immigrants from African countries that include Angola, the Democratic Republic of the Congo, Congo, Guinea, and Sierra Leone.

For context, only eight Angolans and 11 Congolese crossed the entire southern border throughout the 12 years from 2007 through 2018, according to CBP apprehension data.

In just the first two months of fiscal 2020, which began on Oct. 1, Del Rio agents have nabbed about 300 illegal immigrants from 11 countries in Africa, making up about 9 percent of the total. They also have arrested nearly 500 Haitian nationals, more than the number of aliens from Guatemala or El Salvador.

Almost 70 percent of the individuals crossing into Del Rio so far this fiscal year are from about  38 countries other than Mexico.

“I think there’s some perhaps NGO, social media messaging, that’s happening south of here that is steering some of this traffic our way,” Del Rio Sector Chief Raul Ortiz said in a previous interview.

He said some groups initially tried to cross the border further south near Laredo, but were likely redirected by the cartels.

“And then, of course, once people enter here, it doesn’t take long for them to pick up the phone and call folks that they know—that are either staged in Brazil, Ecuador, and some of those other countries—to say, ‘Hey, we just crossed through Del Rio sector; it was a relatively smooth process,’” Ortiz said.

Morgan said the numbers coming from countries other than Mexico and Central America are “fairly manageable,” but “we need to get out in front of it.”

The Migrant Protection Protocols, otherwise known as “Remain in Mexico,” is an agreement between the United States and Mexico that allows for illegal aliens to be sent back to Mexico to await immigration court proceedings.

So far, Mexico accepts only Spanish-speaking aliens, but Morgan said talks are underway to expand the program to accommodate other languages.

“We’re confident that they’re going to agree to that,” he said. Further talks with the Northern Triangle nations—El Salvador, Guatemala, and Honduras—are opening the possibility of those countries accepting asylum-seekers from other countries, too.

Aside from those arrested by Border Patrol, many others evade apprehension and enter undetected into the United States.

Morgan estimates at least 150,000 such people sneaked into the United States along the 2,000-mile southern border in fiscal 2019.

“I think that’s conservative. I think it’s higher,” he said.

The method for reaching the 150,000 number isn’t very scientific or complicated, he said.

“I’ll give you an example: A Border Patrol agent may go to an area where there’s no wall system, there’s no technology, and they see footprints in the ground across the border, and they can physically count the footprints, or they see tire tracks.”

The agent will then log those numbers as “got-aways.”

Morgan said most families and unaccompanied children who cross the border illegally will seek out Border Patrol and turn themselves in.

However, the got-aways are “the ones that are running. Why are they running? Those aren’t the good ones,” he said.

“Not every single person that tries to illegally enter this country is a good person. … We have caught pedophiles, rapists, murderers.

“From my perspective … the answer is easy. It’s zero.”