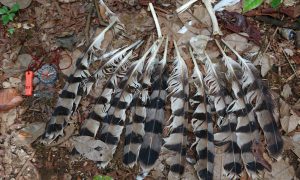 Police at a major port in Indonesia’s second city of Surabaya, where 24 rare birds of paradise were found stuffed in plastic water bottles aboard a passenger vessel yesterday, are coordinating with the authorities at the creatures’ place of origin to tighten security.

Police apprehended the man, named Mulyono, after spotting two bottles with birds inside them. They contained a yellow-crested cockatoo (Cacatua sulphurea) and a green parrot. After interrogating Mulyono and conducting a search, they found 22 more cockatoos.

“Some of the birds were alive, others were half-dead,” Lili Djafar, spokesman for the Tanjung Perak police, told Mongabay-Indonesia. “Possibly because of the five-day trip from Papua and North Maluku and the birds were kept in mineral water bottles.”

The police are looking into whether any of the ship’s crew were involved. Mulyono, a native of Mojokerto, East Java, admitted to bringing the first two birds – he said he got them from a friend in Ambon, Maluku – but denied any connection with the rest.

It was Tanjung Perak’s third arrest for illegal wildlife smuggling in the past two months. An earlier attempt had seen animals packed into paralon pipes.

According to Lily, the port x-rays items passengers bring aboard with them but does not employ the machines for baggage that goes below deck.

The birds have been placed under the care of the East Java Natural Resources Conservation Agency (BKSDA), which is trying to return them to health.

Rosek Nursahid, founder and chairman of the nonprofit ProFauna, said wildlife smuggling was rampant at Tanjung Perak and called on the authorities to tighten security, especially at common ports of origins for valuable species such as Papua and Maluku.

Rosek also asked the Transportation Ministry to prohibit passengers from carrying any wildlife aboard ships.

Tanjung Perak is an important hub in the illegal wildlife trade. Birds smuggled from eastern Indonesia to Java often pass through the port before continuing through a network of wildlife traders in Surabaya, Malang, Jember, Yogyakarta, Bandung and Jakarta.

“These patterns and methods emerged in 2002, and they haven’t changed much by 2015,” Rosek said. “That shows the weakness of the supervision at the birds’ places of origin.”

ProFauna estimates that 40 percent of animals smuggled in this way die as a result of the process.

“Officials at airports, ports, stations and terminals should be trained to detect wildlife crimes, Rosek said, adding that many smuggled animals are purchased by military and government officials.

This article was written by Petrus Riski, a contributing writer for news.mongabay.com, and produced in English by Philip Jacobson. This article has been republished with permission, original article here.