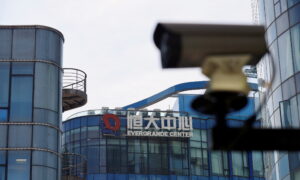 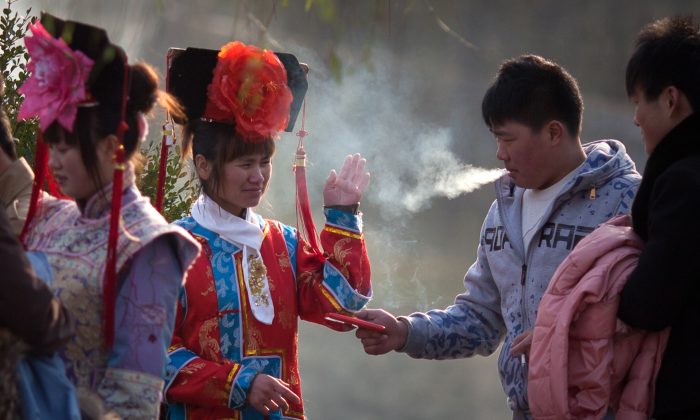 A tourist dressed in Qing dynasty style clothing waves away cigarette smoke in Beihai park in Beijing on Dec. 4, 2012. Efforts to curb smoking in China have not been much of a success owing to widespread ignorance of the laws and lack of enforcement. (Ed Jones/AFP/Getty Images)
China

Smokers in China Increase in Number as Laws Are Widely Ignored

The ministry surveyed hundreds of hotels and restaurants in Shandong, Gansu, Xinjiang and Heilongjiang Provinces over the past year and found that only 1.4 percent of them had anti-smoking signs, despite a national ban on indoor smoking in public places since 2011.

Ninety percent of smokers in these areas said that they would have stopped if reminded about the rule, a ministry director told state-run Xinhua.

“Although the majority of the public support the smoke-free policy in public places, the policies are widely and blatantly ignored,” said Xiaodong Kuang in his study “Print Anti-smoking Advertising in China and Short-term Effects on Adolescents” published in 2008, attributing the neglect to a lack of enforcement.

There are 350 million smokers in China and the nation produces around 40 percent of the world’s tobacco under a state monopoly. Smoking is a popular activity for nearly half the male population in China and many begin smoking at a young age.

It is more frowned upon for women to smoke, but they are still affected by second-hand smoke. About 83 percent of over 72,000 women in China reported exposure to tobacco smoke from their husbands, according a July report from the Almgest, a peer-review journal.

“Even with the ‘no smoking’ sign in many public places, the smokers are still enjoying themselves,” said a netizen in Zhejiang Province, “It seems like for now, smoking can’t be stamped out by this campaign.”

Kuang wrote that the smoke-free policy has only been executed on a local level, unlike other national policies, such as the one-child policy. He named a culture of smoking and business incentives as other obstacles to enforcing the policy.

China is attempting to cut down the number of smokers from 28 percent in 2010, to 25 percent in 2015, according to state-run Xinhua. However, by 2025, it’s predicted that the annual number dead from smoking will reach 2 million, double the number in 2013, writes Kuang.

Among fourteen developing countries, the only country China has managed to best in anti-smoking efforts is Russia, according to research from the Chinese Center for Disease Control and Prevention, cited by the state-run China Daily.

Another netizen, in Jiangsu Province, commented, “This proves that the Chinese government isn’t sincere in its anti-smoking campaign. They’re more likely trading the well-being of citizens for some tobacco tax.”

“You’re allowing sales of cigarettes but not allowing us to enjoy them!” wrote a Guangdong netizen, “If you want to stop people from smoking, then just order the shops to stop selling.”