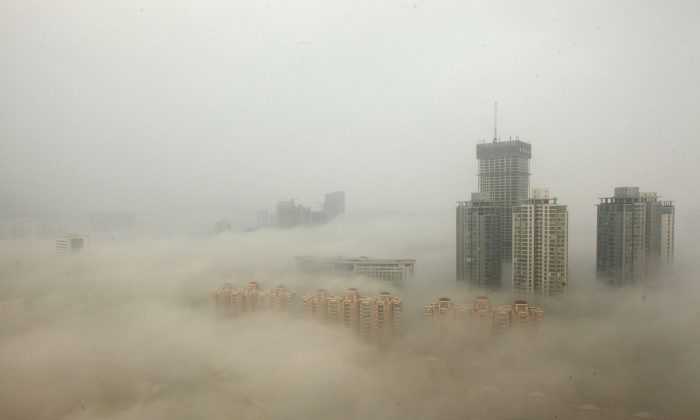 Buildings are shrouded in smog on December 8, 2013 in Lianyungang, China. (Photo by ChinaFotoPress/Getty Images)
China

China’s forests have been mysteriously dying off since 2001. A new report may have not only found the reason why, but warns the problem could soon spread to other countries.

It alleges that nitrogen emissions from pollution in China are killing natural forests at an alarming pace, and that if nothing is done, it will begin killing plants and trees in other countries as well.

The 13-year study was conducted by researchers at the Chinese Academy of Sciences, effectively the think tank of the Chinese Communist Party. Issues like the severity of pollution are politically sensitive in China, and are often censored.

In this case, the researchers were clearly permitted to engage in and publish their findings—but most of the attention paid to the study has been published overseas, and it was given scant to no media coverage inside China.

There appear to be divided views on how to handle the issue within the regime: often, propaganda officials seem to wish to write-off the pollution problem, blaming hostile foreign forces (such as the United States) for releasing accurate data about the level of deadly microparticles in the atmosphere in Beijing. A documentary recently shot in China on China’s pollution was also pulled off the Internet not long after it went viral, attracting 100 million hits.

But the fact that the documentary was produced in the first place, in particular with the extensive consultation and interviews with officials in the environmental sector, meant it clearly had some level of official endorsement, even if that was later countermanded.

At least 40 percent of the natural forests in China’s Hainan Province have died off.

Whether censored or permitted, the problem is indeed dire. Between 2001 and 2011, at least 40 percent of the natural forests in China’s southernmost province, the island of Hainan, died off, according to the new study. At an observation point in Dinghu Mountain, Zhaoqing, researchers watched more than a dozen plant species under an old tree die off until only one or two were left.

“If the situation remains as it is, most forests in southern China will be destroyed within decades. But the impact is not limited in China,” Dr. Lu Xiankai, associate researcher at Chinese Academy of Sciences’ South China Botanical Garden in Guangzhou and a lead scientist of the project, said in an interview with South China Morning Post.

“The problem will have a ripple effect around the world,” he said, calling it a “silent massacre.”

The study was published in the March edition of the Environmental Science and Technology journal, run by the American Chemical Society.

It notes that smog is mainly nitrogen, and that nitrogen is being pumped into the atmosphere by everything from industrial production to vehicle emissions.

The recent documentary, “Under the Dome,” which was pulled offline by the Chinese regime’s censors, claimed that one of the main causes of pollution in China comes from its coal-fired power plants. China has more coal burning power plants than the rest of the world combined. The documentary also laid a large degree of blame at the feet of the petroleum industry, which was accused of regulatory capture: being able to call the shots on how its own products would be refined and allowed onto the market.

Nitrogen also happens to be one of the main nutrients for plants, but too much nitrogen is a problem. The researchers said the smog is overloading the amount of nitrogen in the soil, which is then killing the forests.

“I’m afraid the forests in Hong Kong are experiencing the same problem,” Lu told South China Morning Post. “They are in a similar environment and affected by more or less the same level of air pollution.”