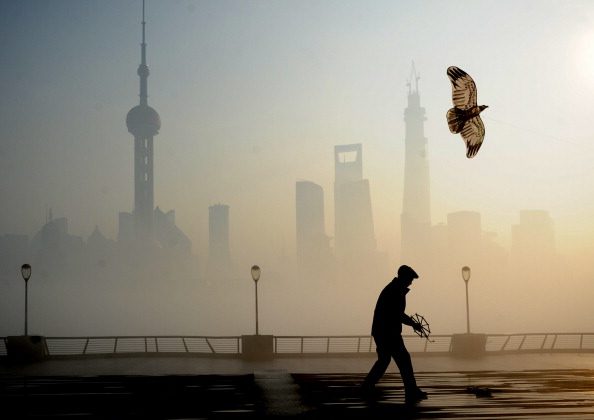 A man flies kite at The Bund on December 5, 2013 in Shanghai, China. Heavy smog continued to hit northern and eastern parts of China, disturbing the traffic, worsening air pollution and forcing the closure of schools. (ChinaFotoPress/ChinaFotoPress via Getty Images)
China

The China Meteorological Administration sent out an orange alert for smog on Dec. 8, which is the third day of continuous, high-level air pollution alerts. Orange is the second most severe alert issued.

Data from the Ministry of Environmental Protection shows that air quality in 104 cities in 20 provinces are suffering from heavy pollution, according to the regime mouthpiece Xinhua news agency.

Nearly half of China has been hit by smog, with the southeastern regions of China having the most severe smog conditions. All the 23 air-quality monitoring stations in southern China’s Hunan Province show “heavy pollution” on the afternoon on Dec. 8.

On Dec. 7, Shanghai and Nanjing had red alerts for smog, the highest level of smog alert. Some of China’s cities that have a good reputation for clean air also had pollution alerts, such as Nanning in southern China’s Guangxi Province. Nicknamed the “Green City,” Nanning got an orange alert for smog on Dec. 6.

On Dec. 8, several major highways in China were temporarily closed due to the smog, including Beijing-Harbin, Beijing-Tianjin, Beijing-Shanghai, Beijing-Hong Kong and Beijing-Macau Expressways.

Air traffic was delayed in Shanghai, Jiangsu, Henan, Shandong and other provinces. Construction projects are suspended in central China’s Wuhan City, and schools are closed in Shanghai and some other cities, according to Xinhua.

China’s air pollution in 2013 is the worst in the past 52 years, and 13 provinces have set all time highs for air pollution this year, according to Ministry of Environmental Protection.