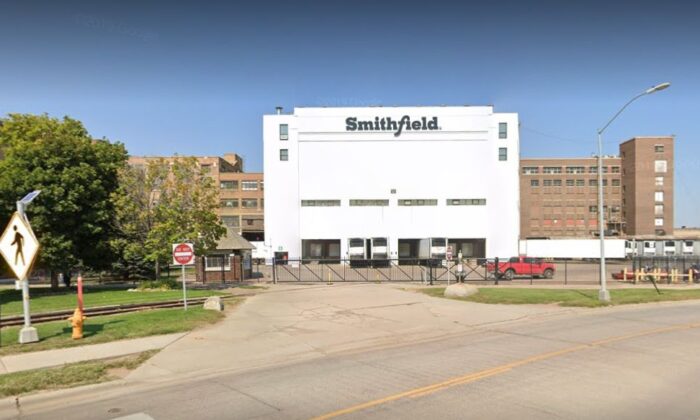 A South Dakota plant operated by Smithfield Foods, a Chinese-owned meat company with facilities across the United States, is now possibly the largest CCP virus outbreak hot spot in the United States.

More than 518 employees at the Sioux Falls pork processing plant have tested positive for the virus, and 126 non-employees have become infected after coming into contact with a Smithfield employee, said the South Dakota Department of Health. Meanwhile, in the past 24 hours, 80 of South Dakota’s 180 new cases came from people who work at the Smithfield plant, according to the local Argus Leader newspaper and KELO.

The surge in cases at the plant comes as South Dakota Gov. Kristi Noem defended not her decision not to issue a shelter-in-place order.

“Let’s be perfectly clear: a shelter-in-place order would NOT have prevented Smithfield from happening. They are a critical infrastructure business. They are part of the nation’s food supply chain and contribute to South Dakota’s role feeding the country and the world,” she wrote on Twitter.

A team from the U.S. Centers for Disease Control and Prevention (CDC) will arrive in South Dakota to assess the situation, Noem wrote.

“The closure of this facility, combined with a growing list of other protein plants that have shuttered across our industry, is pushing our country perilously close to the edge in terms of our meat supply,” Smithfield’s chief executive, Kenneth Sullivan, said in a statement on Sunday. The plant employs about 3,700 workers and produces between 4 percent and 5 percent of the U.S. pork.

“We have a stark choice as a nation: we are either going to produce food or not, even in the face of COVID-19,” Sullivan warned.

According to the Reuters news agency, other poultry and meat processors including Cargill, Tyson Foods, and JBS USA have idled plants in other parts of the country.

Smithfield Foods is headquartered in Smithfield, Virginia, and it is wholly owned by the WH Group of China. The company was bought by the Chinese firm in 2013 for $4.72 billion, and at the time, the acquisition of Smithfield’s 146,000 acres of land made WH Group one of the largest international owners of American farmland.

Executives from WH Group, Smithfield’s parent company in China, regularly visited the plant, according to two employees. The visit preceding the first confirmed case did not include a plant tour and was limited to meetings in a separate building, another employee said. The visit took place roughly one month after President Donald Trump banned travel from China, where the pandemic originated. All of the employees spoke on the condition of anonymity.

Three Smithfield employees told The Epoch Times Wednesday that the company offered workers a $500 bonus to keep working after the plant had its first confirmed case. One employee said they had informed the management multiple times about feeling sick, but was told to keep working. The worker eventually tested positive for COVID-19.

“Whenever anyone felt sick or didn’t feel the best after we started becoming short staffed they would try [and] keep [you] there no matter what,” the employee said.