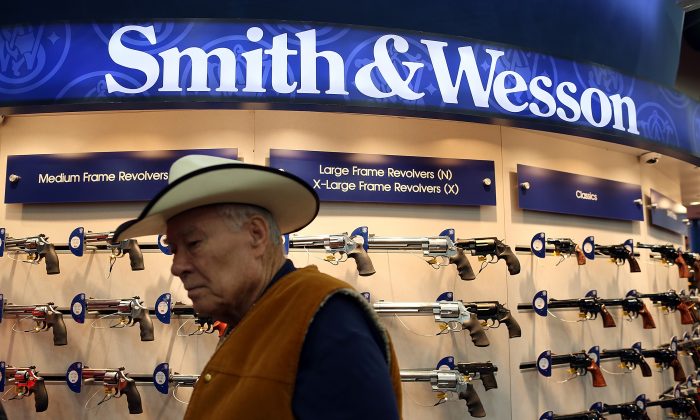 An attendee walks through the Smith and Wesson booth during the 2013 NRA Annual Meeting and Exhibits at the George R. Brown Convention Center in Houston, Texas, on May 3, 2013. New York Public Advocate Bill de Blasio announced July 22 that eight hedge funds and money managers have divested gun holdings valued at $150 million. (Justin Sullivan/Getty Images)
US News

Gun manufacturer Smith & Wesson said that it has moved its headquarters from Massachusetts to Tennessee, citing recent gun-control legislation that has been proposed in Massachusetts.

“This has been an extremely difficult and emotional decision for us, but after an exhaustive and thorough analysis, for the continued health and strength of our iconic company, we feel that we have been left with no other alternative,” said CEO Mark Smith said in a statement.

Smith & Wesson then cited legislation circulating in the Massachusetts Legislature that would bar the firm from making certain guns in the state.

“These bills would prevent Smith & Wesson from manufacturing firearms that are legal in almost every state in America and that are safely used by tens of millions of law-abiding citizens every day exercising their Constitutional 2nd Amendment rights, protecting themselves and their families, and enjoying the shooting sports,” Smith’s statement continued.

Smith added that it hopes the proposed bill will be defeated during the Legislative session, according to the statement.

“These products made up over 60 percent of our revenue last year,” the firm said, “and the unfortunate likelihood that such restrictions would be raised again led to a review of the best path forward for Smith & Wesson.”

In comparison, Smith said that the company received “strong support” from the state of Tennessee as well as Blount County.

The company’s move will bring about 750 jobs and is an investment of around $125 million, the Tennessee Department of Economic and Community Development said.

A bill introduced in the Massachusetts state Legislature includes HD 4192, known as the An Act To Stop Mass Shootings, which attempts to stop the making of “assault weapons” or large-capacity magazines in the state.

Springfield, Massachusetts, Mayor Domenic J. Sarno said that Smith & Wesson’s decision “devastating news to the 550 employees and their families who will be losing their jobs,” MassLive reported.

Rep. Richard E. Neal (D-Mass.) called back to Smith & Wesson’s long history in the city, saying that it is “disappointing to hear ” the company will move from Springfield to Tennessee.

“The relationship between Smith & Wesson and Springfield predates the Civil War,” Neal added. “Since 1852, they have been an anchor in our community providing solid employment opportunities to residents of this area for generations. While the loss of jobs is discouraging to our region, I am heartened that some will remain. I look forward to continuing our relationship with the company as it undergoes this transfiguration.”