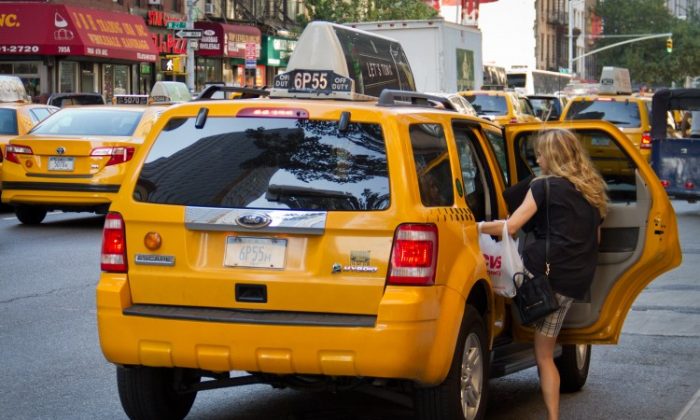 Soon you may be able to hail a cab with your smartphone. (Benjamin Chasteen/The Epoch Times)
US

Smartphone Apps for Taxis Within Sight for New Yorkers

NEW YORK—New Yorkers and tourists are a little closer to hailing taxis through smartphones and prepayment.

The entity that governs the city’s taxi industry, the Taxi and Limousine Commission, released proposed rules Monday that would tweak the way taxis can accept payment and street hails.

The current agreements between the commission and its payment technology providers expire in February 2013, giving the commission a chance to reshape the next set of contracts.

The new rules would allow applications (apps) that have been providing taxi operators in multiple cities the ability to accept prepayment for rides and also allow passengers to connect with taxis through smartphones, instead of just being able to hail on the street.

Apps are already used in multiple cities across the nation and world. Two types are used in New York City: one for taxis that can carry disabled persons, and one for the black car industry, which can operate legally only through scheduled pick-ups.

Under the planned rule changes, drivers could use apps to connect with passengers, but permissible apps would have to be licensed by the commission. Drivers could only use apps when legally standing, and could not use them at JFK or LaGuardia airports or the taxi lines at Penn Station or Grand Central, where the queues are managed.

Apps would not show identifying information such as where the potential passenger would be going.

“Taxi passengers should be able to use the most up-to-date technology available to find a cab faster,” said TLC Commissioner David Yassky in a statement. “We welcome feedback from the taxi and car service industries on how taxi-hail apps can best supplement the existing service models, so that we can finalize these rules and get apps on passengers’ smartphones by early next year.”