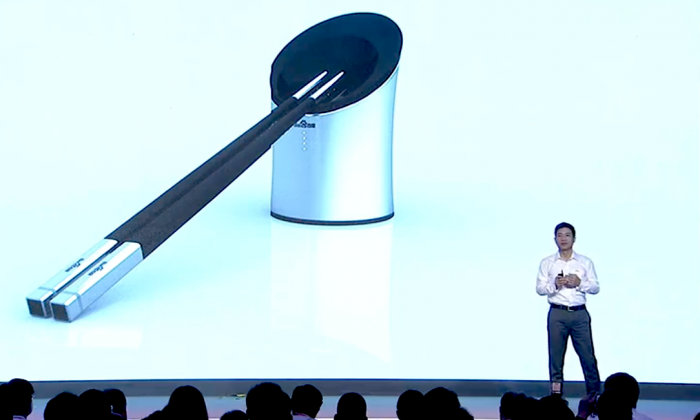 Robin Li, chairman and chief executive officer of Baidu Inc., introduces the Smart Chopsticks at the Baidu Technology Innovation Conference 2014 in Beijing on Sept. 3, 2014. The device was invented in response to the regular food safety scandals in China. (Screenshot/Baiduworld)
China

Originally taken as an April Fool's Day prank, the product has come to life
By Lu Chen

In ancient China, as the myths goes, the Emperor would use silver chopsticks to eat his food—because they would turn black if the food they touched contained poison.

Modern China now has an app for that: Smart Chopsticks, which promise to detect contaminated water, “gutter oil,” and chemicals in foods.

The product aims to respond to Chinese peoples’ general wariness about what they eat in the face of constant scandals of fake meat, gutter oil—that is, the stuff produced by underground workshops that use leftover oils and animal fats collected from the gutters outside restaurants—and chemical-laced rice and baby formulas.

Like the newest smartphone, the product was unveiled at a tech presentation held by Robin Li, the chairman and chief executive officer of Baidu Inc., China’s largest search engine. The chopsticks connect to a phone app using Bluetooth.

“They can detect gutter oil,” Li said, to audience applause.

The device has three basic functions: it can analyze the quality of oil it touches and grade it superior, good, or bad. It can identify the pH levels, a measure of acidity or alkalinity, of liquids. Finally, it is supposed to be able to analyze the level of sweetness and even origin of fruits.

Data collected by the chopsticks is then beamed to the phone app, which analyzes the information and sends a conclusion to the chopsticks. An LED on the devices then lights up: blue means good quality, red means stay away.

Baidu released a video of the Smart Chopsticks on April Fool’s Day this year. The video went viral online, but was taken as a prank.

“But now we have the product made,” Robin Li said. Baidu hasn’t given a timeline for when it will be put on the market.

Reaction online was a mixture of excitement at the product and disappointment that such a product was necessary. “If the safety of our food is guaranteed, would we need something like these chopsticks??” wrote cheer_liu.

Food safety has become a major social issue in China in recent years. The regime on Wednesday announced prison sentences for up to eight years of 39 people in 17 food safety cases. They were guilty of adding chemical contaminants, like industrial salt, during the processing of meat, seafood, vegetables, and even medications. The court says one group produced and sold three tons of contaminated bean sprouts per day.

In 2013, police in the coastal city of Wenzhou uncovered 10 underground mills that used massive amounts of chemical additives and coloring agents to clean out-of-date meat and sell it to the public. The Ministry of Public Security in 2013 released a warning to consumers in Shanghai that recent lamb products may have been either rat, fox, or mink meat.

One of China’s biggest dairy companies, the Sanlu Group, was found to have produced baby formula containing melamine, a deadly chemical, in 2008. The poisoning led to the deaths of six babies and illnesses of over 300,000.

“There’s no food for us to eat,” wrote Internet user KathieCANke on Sina Weibo, China’s version of Twitter. “Everything’s poisoned.”