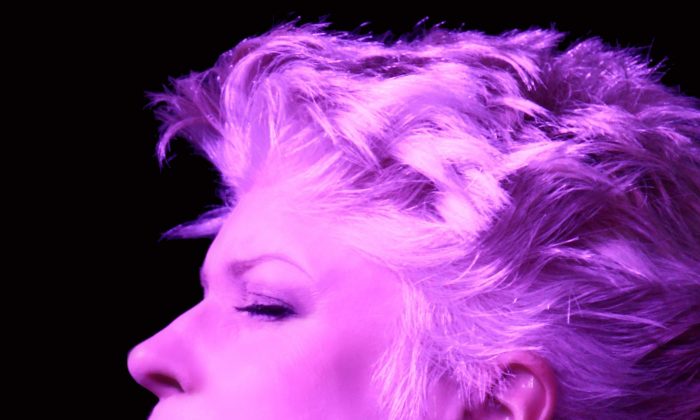 NEW YORK—It was at the Cafe Noctambulo on Second Avenue that this writer saw the amazing jazz singer Nancy Kelly. You may not know Nancy Kelly, but you should. As she describes herself: “I swing harder than anyone.”

With idols like Billie Holiday, her great chops are understandable. (And as she says, who in jazz doesn’t study Ella.)

John Gilbert of Jazz Review wrote about Kelly, “If swing was gold, Nancy Kelly would be the richest woman on earth,” and Downbeat magazine readers voted her one of the top jazz singers in the country for two years running.

Born in Rochester, New York, where she still maintains an active vocal studio, Kelly is a classically trained pianist and studied jazz vocals at the Eastman School of Music. Though she has traveled extensively to perform, she will tell you that the vocal studio is her bread and butter.

She recently signed with Canadian agent Jean Leduc of Launched Management and is looking forward to more European travel.

Though she is quite well-known in her native upstate New York, periodic performances at New York’s top jazz clubs have not drawn the audiences that the few, better known names have.

Why is this? The jazz audience has aged and disappeared, said jazz pianist-singer and songwriter Ronny Whyte, who was also at Cafe Noctambulo that night. Like Kelly, he is well-known among jazz aficionados but not a household name.

The cost of expenses and real estate has either caused clubs to close or, with the advent of the Internet age, done away with extras like publicists, Whyte explained.

Agreeing with Whyte, Kelly said that if you are not with a large record company, you still have to produce CDs—even if you do your own, just so that you will have product out there.

Fortunately, Kelly’s first CDs were with Amber records until, as the owner said, the audience for jazz records went away. Also fortunately, Kelly’s strong social media efforts, especially on Facebook and Twitter, have kept her current.

As many intellectuals have put it, jazz is the true American art form. Though jazz started in the late 19th century, it has gone through several incarnations. Originally from European and African roots, jazz moved from ragtime, through rhythm and blues, to the romantic times of the post-war 1940s. As musician J.J. Johnson said, “Jazz keeps on evolving. It will never settle down.”

Today jazz is carried on by a few major stars in U.S. cities like New Orleans, San Francisco, and New York.

Smaller jazz lovers are involved as well. Jazz producer Ari Silverstein is one of those working hard to keep jazz alive. Every Friday and Saturday through Aug. 1, he presents talented jazz artists in an intimate, classy, yet reasonable venue at a small downtown club named Cafe Noctambulo, part of the Pangea restaurant.

Obviously, it’s not for lack of talent that jazz is not as popular as it once was. Listening to Kelly sing one incredible tune after another, making fans of those attending, was inspiring—but it also makes me wonder why artists of this caliber are not household names.