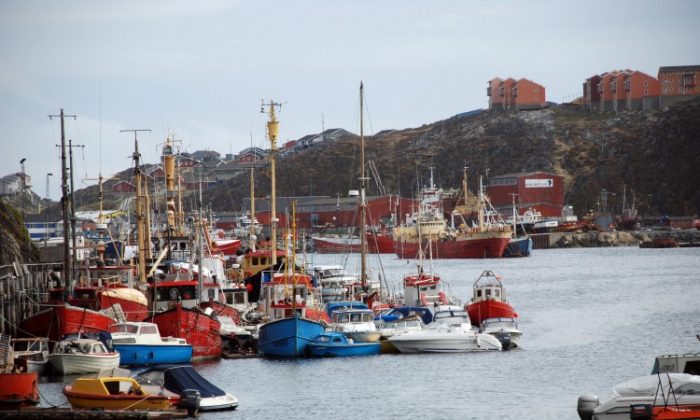 The port of Nuuk, capital of Greenland, July 6, 2009. Manufacturing could bring an influx of foreign workers to the Arctic island, heralding great change for the sparsely populated land. (Slim ALLAGUI/AFP/GettyImages)
Europe

A planned smelting plant in the small Greenlandic town of Maniitsoq has some local residents looking forward to the employment opportunities it will bring. The plant would also bring an influx of foreign workers—which hotel owner and former mayor of Maniitsoq, Soren Lyberth is worried means an increase in crime such as rape and drug abuse.

Greenland—the huge but very sparsely populated Arctic island, with a total population of roughly 57,000—is immersed in a national debate. What happens when a small society suddenly doubles in size because of an influx of foreign labor? How should it respond?

Maniitsoq in western Greenland has about 2,800 inhabitants, but unemployment is a problem, and the population is dwindling.

“Many young people have moved to other places to find employment, so our population is shrinking,” said Karl Lyberth of Maniitsoq, who represents social democratic party Siumut in the Greenlandic Parliament.

Many hope that this will change with the planned establishment of an aluminum industry in Greenland by international aluminum giant Alcoa. Lyberth thinks that the planned smelting plant will solve the town’s unemployment problem. Currently, there are 300 unemployed people in Maniitsoq.

Building the plant is expected to employ some 2,000 people over a period of two or three years. Maniitsoq does not have enough manpower to keep the plant running on its own, however. Most of the workers will be Chinese men.

To stem the crime Soren Lyberth expects to come with the great population shift, he has suggested that Maniitsoq open up a brothel to service foreign workers. Lyberth’s statements have raised a national debate.

Karl Lyberth does not think that it will get to the point of having a brothel if and when Alcoa builds their smelting plant.

“There won’t be a brothel in Maniitsoq. The local residents are strongly against it. I know about this debate right now, but I honestly don’t think there will be any prostitution,” Karl Lyberth said.

Naaja Nathanielsen, who represents the biggest party in the Greenlandic Parliament, the socialist party Inuit Ataqatigiit, rejects Soren Lyberth’s idea of organized prostitution, saying that it is not something she wants for the Greenlandic community.

Prostitution is illegal in Greenland, and Johan Davidsen of the Qeqqata police (the municipality where Maniitsoq is located) said that prostitution has never been a big problem in Greenland. He is not aware of any criminal cases regarding prostitution. It is one of the few countries where organized prostitution does not exist.

“Bringing prostitutes over is nothing new. People have done this for the military bases before,” Soren Lyberth said in an interview with Greenlandic newspaper Atuagagdliutit. Lyberth imagines that the prostitutes, just like the workers, would be brought in from the outside.

When contacted by The Epoch Times, Soren Lyberth did not want to give any further comments about his brothel proposal.