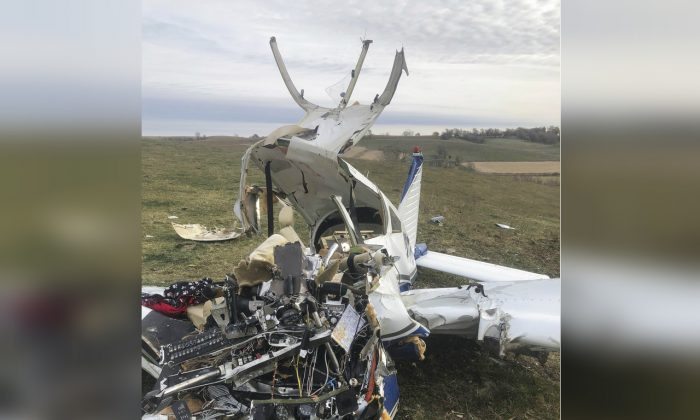 A small plane crashed in central Iowa, killing all four people on board, including a teenage girl on Nov. 10, 2018. (Guthrie County Sheriff's Department via AP)
Crime and Incidents

Small Plane Crashes in Iowa, Killing All 4 People on Board

GUTHRIE CENTER, Iowa—A small plane crashed in central Iowa, killing all four people on board, after the pilot apparently had a heart attack and a student pilot was attempted an emergency landing, authorities said on Nov. 10.

The plane dropped off radar Friday night about 4 miles from Guthrie Center airport, the Guthrie County Sheriff’s Office said in a news release. Searchers found the wreckage Saturday morning in a cow pasture southwest of Guthrie Center, which is about 115 miles southwest of Le Mars, where the plane had taken off.

The sheriff’s office identified those killed as the pilot, 49-year-old Edward Ralph Anderson, 36-year-old Patrick Kellen, and 15-year-old Samantha Clark, all of Le Mars, and 28-year-old Tyler Douvia, of Merrill, which is next to Le Mars in northwestern Iowa.

The 1979 Piper single-engine plane was headed to Osceola, south of Des Moines, when the Des Moines Air Traffic Control requested an emergency landing for it at the Guthrie Center airport, the sheriff’s office said. It said a student pilot was going to attempt an emergency landing, but it didn’t specify whether that was Kellen, Clark or Douvia.

The plane crashed “very hard” and all of the victims were found dead at the scene, the sheriff’s office said.

Tom Mullally, who manages the Le Mars airport from which the plane took off, said the four were going on a hunting trip.

Their bodies were taken to the Iowa Medical Examiner’s Office for autopsy. The FAA will investigate the cause of the crash.