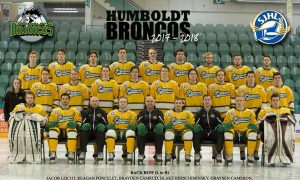 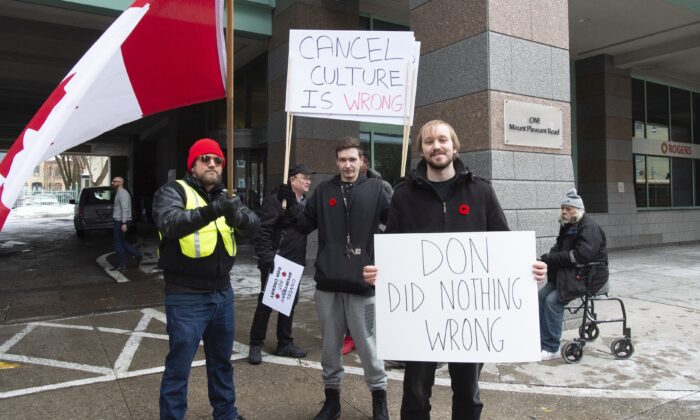 Some stood silently on the sidewalk with Canadian flags while others raised placards in the air. One sign said, “Cancel culture is wrong” while another said, “Rogers cancels Don, we cancel Rogers.”

Sportsnet fired Cherry this week following his comments on “Hockey Night in Canada,” which many felt were critical of immigrants for not wearing poppies. Cherry used the phrase, “you people,” during the “Coach’s Corner” segment Saturday night but has denied that he was singling out visible minorities.

“He’s a true Canadian, someone that you’re proud to have in this country to represent Canada,” said supporter Paul Vanin. “To me, I feel sad that people actually, just for a mistake that he made, they’re trashing him. They said, ‘You’re done.’ I don’t know about that.”

HNIC was a longtime CBC Saturday night staple, but the show and its games moved to Sportsnet in 2014 after Rogers agreed to a lucrative, long-term rights deal with the National Hockey League. “Coach’s Corner” and HNIC are still broadcast on CBC in a sub-licensing deal with Rogers Media, which owns Sportsnet.

Protesters remained rather quiet on what was an unseasonably cold autumn afternoon. Some Cherry supporters held court with reporters while others let out an occasional chant to voice their displeasure at his ouster.

A consistent needle-mover throughout his career, Cherry’s firing has dominated the Canadian news cycle since his departure was announced Monday. It was no surprise that some two dozen media members, about a 1-1 ratio to protesters, took in the proceedings on a downtown sidewalk.

Some passing motorists honked in support of the protest. Curious Rogers employees took pictures from the second-floor food court overlooking the building entrance. Security guards kept watch nearby and a couple Toronto Police cruisers sat across the road.

An online petition asking to have Cherry reinstated to Hockey Night in Canada had garnered close to 200,000 signatures as of Nov. 13.

“Don Cherry is a Canadian icon and a symbol of the working class,” the petition says. “He may be politically incorrect and may not have been as careful as he should have in his remarks, but his offence does not warrant firing.”

With his over-the-top bombast and on-air chutzpah, Cherry has always been a polarizing broadcaster. His final segment and eventual firing have been just as divisive, with social media providing a feeding ground for both sides on the issue.

Many prominent hockey observers have steered clear of the controversy. But the subject has been a hot talking point for news/talk radio and television panels, including the CTV daytime show “The Social.”

In Wednesday’s opening segment, correspondent Jessica Allen acknowledged that she “struck a nerve with many people” after voicing her thoughts on the Cherry subject and hockey culture.

She told viewers a day earlier that she doesn’t “worship at the altar of hockey” and found in her experience that those who did “all tended to be white boys who weren’t, let’s say, very nice,” adding that “they were not generally thoughtful, they were often bullies.”

The hashtag “FireJessAllen” was soon created and many hockey parents expressed anger over the comments. Allen later clarified that she was only speaking to her own experiences with specific people who were hockey players.

Since his departure, Cherry has made the media rounds on a number of regional and national outlets. The 85-year-old also appeared on the Fox News channel’s “Tucker Carlson Tonight” show in the United States.

Sportsnet has yet to confirm who might replace Cherry this Saturday or if the segment will continue in its usual form. A spokesman said the network was “considering options.” Segment co-host Ron MacLean did not return voice mail messages seeking comment.