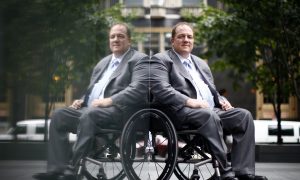 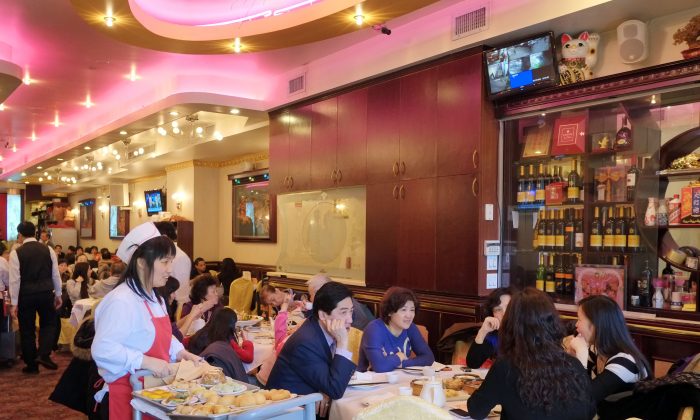 A waitress brings a cart of dim sum to a table of customers at a restaurant in the Chinatown neighborhood of New York, on Jan. 19, 2013. (Mark Lennihan/AP Photo)
NY News

Many small Chinese restaurants in New York are being targeted by lawsuits brought against them under the Americans With Disabilities Act (ADA), and it’s a nationwide trend.

The steps at the entrance of a Chinese restaurant in New York’s Chinatown have landed the owner in legal trouble. On July 4, Lin Kwok Keung, a wheelchair-bound man, filed a lawsuit against four Chinese restaurants in Chinatown on the grounds that the restaurants’ dining environment did not comply with the ADA. Lin has previously sued more than two dozen restaurants.

According to records in federal court in the Southern District of New York, the four Chinese restaurants are Ajisen Noodle Restaurant at 14 Mott Street, Rong City Fish Balls at 21 Eldridge Street, Tao Hong Bakery at 79 Chrystie Street, and Bambu Franchising Beverages Shop at 124B Hester Street. They are all small restaurants.

The 13-14 page lawsuit alleges that the restaurants violate more than two dozen rules of the ADA, ranging from not having ramps and/or wheelchair lifts that meet standards, to not having access to restrooms, including accessible mirrors in the restrooms. Each lawsuit seeks $1,000 in damages, attorney’s fees, and changes to the facility to make it more accessible and compliant with the ADA.

Mr. Guo, the owner of Rong City Fish Balls, recently told The Epoch Times that the restaurant’s predecessor, My Noodle Station, was sued by Lin in 2019. The owner closed down in March last year, and Guo took over the place.

Guo said Lin sued him personally in the last case in April or May last year. That case was just settled last month, and now he’s filed another case, this time against the restaurant.

Buildings in Chinatown are old, and many of the small restaurants can’t afford to renovate the spaces they rent to comply with the ADA. Since 2019, dozens of Chinese restaurants in Chinatown have been continuously sued by people with disabilities.

A number of restaurants have put up signs at the entrance with a phone number and a bell for the disabled to arrange special take-out service. Some have built temporary ramps. However, some small restaurants continue to be sued.

It appears that all of the suits were filed by attorney Bradley Weitz of Aventura, Florida, the same attorney who signed the cases Lin filed against Chinese restaurants in the past.

Under federal law, Title III of the ADA does not empower individuals to make monetary claims for public space, but allows them to recover attorney fees.

According to the report, Weitz was seeking $425 per hour in legal fees, and the nature of the complaints was the same, meaning that once the first lawsuit was filed, the same language has been copied over and over again, only with a different name.

Early ADA settlements averaged $16,000, but the disabled plaintiffs in those cases typically received only $500.

Brett Klein, the former Los Angeles Superior Court Judge once commented on ADA lawsuits, saying: “With these wheelchair cases, when we first started seeing them in the Courthouse, it wasn’t obvious that someone had invented a new way of doing business. It took a while to realize that, and then we started seeing the same names of lawyers over and over again and the same names of plaintiffs.”

The report notes that many states have recognized the growing problem of ADA litigation and have passed legislation to address the problem without compromising the Act’s basic objectives. New York State has capped plaintiffs’ damages at $1,000, set an upper limit on the reimbursement of attorney fees, and required the attorney general to conduct an annual review of the law firms that filed the most ADA suits.

The American Tort Reform Foundation’s Judicial Hellholes program documents in annually published reports various abuses within the civil justice system, focusing primarily on jurisdictions where courts have been radically out of balance. According to a recent report, courts are awash with lawsuits taking advantage of the ADA across the nation, with California and New York counting as the worst “judicial hellholes.”

While Gov. Andrew Cuomo has long maintained that New York is a business-friendly state, the litigation and regulatory environment tells a very different story, the report says.

New York City is a hotbed of disability lawsuits, according to the report. From January 2014 to June 2019, litigation over New York businesses’ full ADA compliance in federal courts increased by 300 percent. By 2019, ADA lawsuits filed in New York reached 2,635, second only to California, with 4,749. Despite a decline in such lawsuits due to the pandemic, New York retained its second place in 2020.

New York ranks first in the nation in the number of mass lawsuits filed by blind people against commercial websites. The lawsuits claim that blind and visually impaired people do not have “barrier-free” equal access to these commercial websites because they lack technology such as screen readers. Over 1,300 such claims were filed in 2019 in federal courts in New York, more than in all other states combined.

Most of the ADA suits in New York were filed by a small number of plaintiffs. For example, Jermaine Deleston and his attorney Erik Bashian had sued at least 80 companies by the end of 2019.

Florida resident Deborah Laufer has filed at least 47 lawsuits against various hotels in New York State. She calls herself a “tester” and enforces the ADA on businesses that don’t comply. Laufer has accused the hotels’ booking site of accessibility compliance issues and is estimated to have filed more than 300 such suits in nine states.

According to Seyfarth Shaw, a law firm representing ADA suits, plaintiffs filed at least 11,053 such suits in federal court in 2019—an increase of 890, or 8.8 percent, over 2018. The firm said this is the highest number since they started tracking such lawsuits in 2013, when there were only 2,722 cases. These numbers include ADA Title III suits filed on a variety of grounds—physical facilities, websites and mobile apps, service animals, sign language interpreters, etc. They do not include the large number of disability accessibility suits filed in state courts, which are more difficult to accurately track.

California, New York, and Florida continue to lead the nation with the highest number of lawsuits filed, with California and New York each breaking their own ADA records.