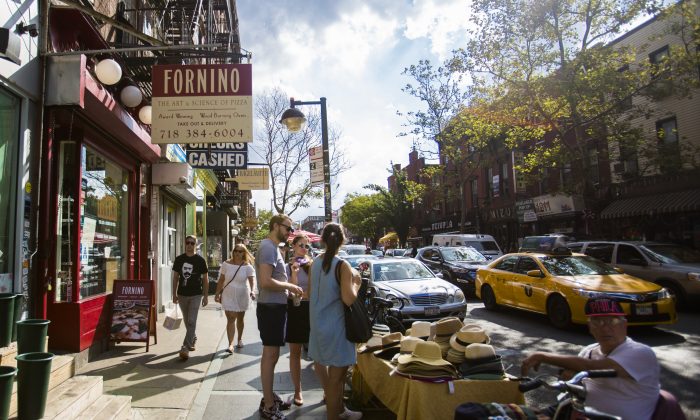 Bedford Avenue in Brooklyn, on Aug. 19, 2016. Small businesses in north Brooklyn are likely to lose customers when the L train shuts down for 18 months, starting in 2019. (Samira Bouaou/Epoch Times)
New York

NEW YORK—The corner stores and mom and pop shops are likely to be hardest hit when the L train halts its brisk rattle through the Canarsie Tunnel between Brooklyn and Manhattan in 2019.

Of the 400,000 daily L train straphangers, 225,000 are tunnel travelers, who will be forced to cross the East River somewhere else once the L is confined to the Brooklyn mainland for 18 months.

The Metropolitan Transportation Authority (MTA) kicked nerves into high gear in January when it announced that some sort of shutdown was inevitable, to allow for badly needed repairs after Superstorm Sandy damage in 2012.

Last month, the MTA’s decision to fully close the tunnel and the Manhattan portion of the line for 18 months answered the first unknown. But the full extent of the annoyance won’t be clear until alternative transportation options are unveiled, for which a timeline has yet to be set.

The shutdown will begin no sooner than January 2019—eons away for some, but close enough to cause concern for those whose livelihoods depend on the subway to deliver their customers.

“The impacts are going to be felt by the businesses that live off foot traffic,” Hoan said. On the Brooklyn side, the pain is predicted to be sharpest for the businesses around the Bedford Avenue stop in Williamsburg—which will become the last stop on the L line.

Arthur Palacio, manager at eatery Dos Toros on Bedford Avenue, said he expects the business will be impacted “dramatically” during the shutdown.

Usually, business is bustling from 5 p.m. to around 9:30 p.m., he said, but “we’re dead at night when something happens to the L train.” Perhaps a portent of things to come.

Palacio said there are 11 branches of Dos Toros in the five boroughs and the shutdown will likely require some staff shuffling, depending on where everyone lives in relation to the branches close to the L line.

Chamber of Commerce staff have been visiting businesses along the L train corridor to offer support and information.

“It’s worth looking at the Second Avenue subway construction for comparison,” Hoan said. “We need to take that playbook and apply it to the L line.”

But business owners looking for reassurance from experiences along the Second Avenue subway construction zone aren’t likely to get any.

Manhattan Chamber of Commerce numbers show almost half of the businesses that were open on Second Avenue between 68th and 95th streets when construction started in 2007 have moved or closed within the last five years due to declining revenues, according to a Gotham Gazette report from February 2015.

Other businesses have had to lay off staff and cut store hours, according to a Public Advocate report released two years after construction began. No grants or property tax abatements were made available to the businesses.

Any plan that falls short of replicating the L train aboveground will put small businesses in peril, says Hoan.

“Whatever the L train is doing, we need to bring that aboveground for however long it’s going to be closed,” he said.

Probable solutions will include greater service on the A, G, J, and M lines, as well as shuttle buses and possibly a designated lane over the Williamsburg Bridge. Increased ferry service is also in the mix. The L Train Coalition, a bevy of government and non-government organizations, is leading the effort to determine the fix.

The shutdown still seems far off for most renters, who are generally transient and often sign one-year leases.

Residential real estate marketplace StreetEasy said it has not recorded any shift in listing numbers or prices for rentals or sales, nor is it expecting to.

“We are not predicting any tangible effect on real estate in Brooklyn leading up to or during the L train shutdown,” said Samantha Jacob, spokesperson for the company, in an email, Aug. 16.

She said renters might have some leverage to negotiate a lease or ask for certain concessions, for instance, “a free month’s rent or annual gym membership in [the] building.”

But there’s no need to ask quite yet, said Sarah Burke, managing director for Brooklyn development at real estate firm Douglas Elliman. “Wait until it’s closer to when the train’s actually going to go down, because right now, the train’s running fine.”

Burke has been a Williamsburg resident for 12 years and lives closest to the Bedford Avenue stop—and she’s staying put. She predicts a short-term slowdown in the real estate market as the shutdown looms.

Manhattanites will likely be more hesitant to jump over the East River now, Burke said on Aug. 16. “However, once the temporary solutions of getting around [are announced], people will start to realize it’s not going to be the biggest end of the world.

“When the train reopens, I think there’s going to be a whole new flurry of people flocking here,” she said.

A note of positivity is emerging that the Williamsburg community is strong enough to partially weather the shutdown. Several small business owners along Bedford Avenue mentioned an uptick in foot traffic since the opening of a Whole Foods store (July 26) and an Apple store (July 30).

Stations closest to the under-river section will also get facelifts.

The MTA toyed with the idea of closing one track at a time to repair the other—a potential five-year operation. But, the 18-month shutdown of both tracks was the final decision.

“We think it is better to have a shorter duration of pain than a longer, more unstable process—and risk unplanned closures—by leaving one track open during construction,” said New York City Transit President Veronique Hakim in a July 25 press release.

The Canarsie is one of nine underwater tunnels that requires major repair after Sandy. Some of the work can be completed during night and weekend closures, but the R line’s Montague Tunnel under the East River was closed for 13 months and the G line tunnel under Newtown Creek was closed for two months, the MTA said.

The MTA was given $886 million in January 2014 to fix the East River tunnels. A total of $8.46 billion was committed to transportation projects from the federal Sandy bill.

The MTA is addressing tunnel repair in order of importance. Other tunnels in need of repair include the Cranberry Street Tunnel, which serves the A and C lines; the Clark Street Tunnel, serving the 2 and 3 lines; and the Joralemon Street and Rutgers tubes, serving the 4, 5, and F trains.