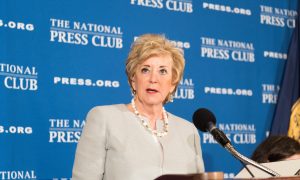 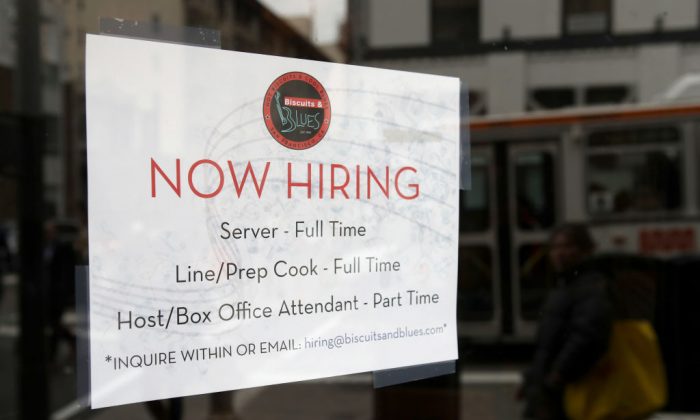 A now-hiring sign is posted at a restaurant in San Francisco, California, on Feb. 12, 2019. (Justin Sullivan/Getty Images)
US News

WASHINGTON—Job creation among the nation’s small businesses has reached its highest rate in 45 years of record-keeping, according to the latest employment report by the National Federation of Independent Business (NFIB).

There was a net addition of 0.52 workers per firm in February, up from 0.33 workers in January and 0.25 in December. The previous record was 0.51 reached in May 1998. The NFIB Research Foundation has collected small-business economic trends data with quarterly surveys since 1974 and monthly surveys since 1986.

“Small businesses are creating new jobs at an all-time high, which has massive implications for the economy since two of every three new jobs is created by a small business,” NFIB President and CEO Juanita Duggan said in a statement.

In February, a net 31 percent of employers reported higher compensation and a net 18 percent planned increase in the next few months, as the labor market gets tight for both skilled and unskilled workers. Small businesses are expecting to add jobs at a strong pace in the next three months, with construction and manufacturing leading sectors in hiring.

In addition, business owners reducing employment was just 3 percent, the lowest in the NFIB survey’s history.

“Owners are doing everything they can to hold onto the employees they have, while trying to produce effectively without a full staff,” Duggan stated.

The job market is booming with low unemployment, strong job growth, and increasing wages. While this benefits workers, a shortage of labor limits the ability of businesses to expand and grow.

According to the survey, small business owners said that the difficulty of finding qualified workers is their single most important problem. Fifty-seven percent reported hiring and trying to hire. In addition, respondents citing labor costs as their biggest problem reached 10 percent, a record high for the 45-year survey.

More than 99 percent of the businesses in the country are small, and they employ about half of the American workforce. Although small businesses are a significant component of the workforce, they generally lack the resources to compete with larger companies during periods of low unemployment.

“It appears that the shortage of workers will continue to restrain Main Street growth,” Bill Dunkelberg, NFIB’s chief economist, said in the statement. “If businesses were fully staffed, more could be produced and sold.”

Businesses of all sizes, and across all sectors, are struggling to find workers with the talents they need, and the problem is growing. As of December 2018, there were 7.3 million unfilled jobs in the United States.

A survey by ManpowerGroup found that one-third of the employers have lowered their education and experience requirements, with some no longer demanding a college degree.

Small-business optimism increased since President Donald Trump’s election in 2016, reaching the highest levels in decades. But in the last few months, NFIB’s optimism index has come down due to uncertainty about the future. While business owners are continuing to create jobs and increase compensation, the political climate is affecting their outlook for the future, according to NFIB.

Business owners, however, expressed that they were still bullish about the state of their own businesses, with 56 percent projecting revenue increases and nearly three in 10 planning to hire in 2019, according to the survey.

It is not clear whether this decline in sentiment is a short-term problem or the start of a more alarming trend. However, the survey was conducted in January, during the federal government shutdown, which might have affected respondents’ views, according to experts.

The tax reform bill signed into law in December 2017 has offered a deduction of 20 percent of income for pass-through entities such as S corporations and LLCs, the forms of incorporation most often used by small businesses. Under the old tax code, pass-throughs were taxed at 39.6 percent. In addition, small businesses enjoy the full expensing provision of the new tax code, which allows them to deduct the full cost of their investments in new equipment for five years.

Besides tax cuts, another factor driving small-business optimism is regulatory relief. Committed to cutting red tape, the Trump administration continues to roll back regulations to reduce time consumption and compliance costs for businesses.

Regulations hurt small business the most, according to a study by Mercatus Center. Over-regulation poses significant problems for existing small businesses and new entrants.

It costs $11,700 per year per employee to comply with federal regulations for small businesses, compared to $9,000 for large firms. An increase in regulation results in a decrease in hiring among all firms, including small ones.