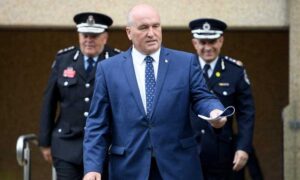 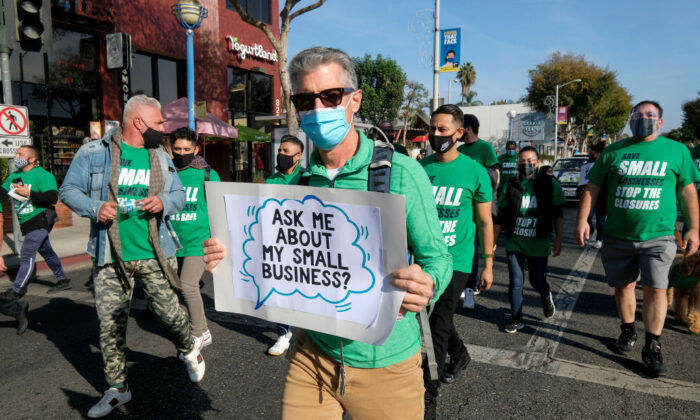 Small business owners and their supporters participate in a Save Small Business protest in Los Angeles, Calif., on Dec. 12, 2020. (Ringo Chiu/AFP via Getty Images)
Cancel Culture

In April, Major League Baseball (MLB) announced it was pulling the 2021 All-Star Game and MLB Draft out of Atlanta, Georgia, in retaliation for the passage of S.B. 202 (pdf), an election integrity law that critics say will suppress the votes of minority electors in the state.

In the wake of the financial burdens imposed by COVID-19 restrictions, critics of the MLB’s move say it will strip Georgia’s business owners of the revenue they were hoping to gain to offset those losses. Many of those who will suffer are minority business owners.

According to a 2019 study by FitSmallBusiness.com, “African American entrepreneurs are concentrated in the south, with Georgia topping the charts.”

A year later, a similar study ranked Atlanta second, behind New York City, for being one of the best cities for black-owned businesses.

Still, MLB Commissioner Rob Manfred said the decision, which will clearly have a direct impact on these minority-owned businesses, was “the best way to demonstrate our values as a sport.”

“Georgians—and all Americans—should fully understand what the MLB’s knee-jerk decision means: cancel culture and woke political activists are coming for every aspect of your life, sports included. If the left doesn’t agree with you, facts and the truth do not matter.”

Manfred said his decision to move the game out of Atlanta “was made after consultation with teams, former and current players, the MLB Players Association and The Players Alliance,” among others.

“Earlier today,” Kemp wrote on Monday, “I spoke with the leadership of the Atlanta Braves who informed me they do not support the MLB’s decision.”

The Epoch Times reached out to dozens of small business owners in the Atlanta area seeking their thoughts on how MLB’s decision would impact their bottom line. However, none were willing to talk on the record. In fact, most admitted they were afraid to talk because they didn’t want to suffer the growing backlash from the cancel crowd.

In an exclusive interview with Alfredo Ortiz, president and CEO of Job Creators Network, The Epoch Times was told the growing fear among small business owners to speak out is due to active harassment and intimidation.

“I equate it to the old-fashioned Mafia shakedown for protection money,” Ortiz explained. “You know, you’ve heard how they would walk around neighborhoods and shake down small business owners. It’s basically like that. It’s scary for them and it’s actually hard to believe that in this day and age they can get away with it. For the corporations, I call it extortion. For the business owners that are suffering, I call it an old-fashioned shakedown.”

According to its website, “Job Creators Network is a nonpartisan organization founded by entrepreneurs like The Home Depot co-founder Bernie Marcus who believe that many government policies are getting in the way of the economic freedom that helped make this country prosperous.”

“They said ‘we would reinvest in our businesses,’” Ortiz said. “’We would hire more people, raise wages and benefits, and put that capital back into the business,’ which is exactly what they did. Now the concern is, when you look at the Biden agenda, they’re going to be reversing that. Small business owners are very concerned that the Biden administration translates into a war on small business.”

According to Ortiz, it’s the political operatives of the left and their “gangs” who are the ones actively intimidating small business owners into silence.

“It’s very well-coordinated and this isn’t the first time they’ve done this. We saw this happening during the Obama administration. But now it’s like it’s on steroids.”

“As the owner of a transportation service in Atlanta, I know firsthand how badly our community wanted the All-Star Game played here,” limousine business owner Darrel Anderson told the Free Beacon April 9. “The $100 million in revenue to this area was going to be the opportunity for all of us to recover some of the losses that we incurred during the pandemic. Now, not only is that revenue gone, we may lose even more because conventions that were planned for Atlanta are now up in the air thanks to this decision by the MLB.”

The Epoch Times reached out to Anderson multiple times, but calls were not returned.

“There’s a fairly well-known black local news anchor here who was trying to get stories and she said it was almost impossible for her to go into the black community to find anyone who would be willing to speak out,” Ortiz said.

“This attack on our state is the direct result of repeated lies from Joe Biden and Stacey Abrams about a bill that expands access to the ballot box and ensures the integrity of our elections,” Kemp’s statement declared further. “I will not back down. Georgians will not be bullied. We will continue to stand up for secure, accessible, fair elections.”

However, Democrat Georgia state Rep. Kimberly Alexander sees the election integrity move as nothing more than a Republican power-grab and an effort to suppress minority voters.

“Right now, the legislature in Georgia is controlled by the GOP,” Alexander told The Epoch Times. “They have the majority. They are actually taking over. Not only does that bill let them take over the secretary of state office, they’re also taking over the county offices, the county election board of elections, and the state election board.”

Alexander also noted that the law will only allow drop boxes to be placed inside the buildings at designated locations, where they are to be “watched and maintained 24/7,” forcing voters to get out of their vehicles and go into the building to place their ballots in a drop box.

Alexander is also opposed to the fact that the law limits the use of provisional ballots, prohibits the mailing of vote-by-mail applications without a request, and makes it a felony for someone other than the voter whose name is on the envelope to mark the ballot.

“The people that we’re talking about who are going to be affected are black, brown, and disabled voters,” Alexander stated.

Asked about her thoughts on how MLB’s decision to pull the All-Star Game might impact minority-owned businesses, Alexander said “more corporations who have workers need to look at this bill.”

“I’m sure some corporations have had their legal teams look at it and find that it’s Jim Crow 2.0,” Alexander insisted. “If the Major League decided to pull out because of this, that’s their choice to do that.”

“I’m sure, not just African Americans but everyone around Cobb County would have gained some type of benefit for the All-Star Game to stay here,” Alexander conceded. “But, at the same time, corporations need to stand up and speak out when they see these outrageous bills coming out that are going to affect the voters who work within their companies. They [MLB] had to make that decision, and if that’s the decision they made, then I respect that. I’m happy to see corporations speaking out about things such as voting.”

“This intimidation is very real,” Ortiz insisted of the new effort to silence anyone who speaks out about how MLB’s decision to pull the All-Star Game will impact small business owners.

“This goes really deep into our community in terms of the fear factor. I mean, it’s horrible. You saw how the left went after Tim Scott, calling him ‘Uncle Tim.’ This kind of intimidation is so real and that’s why our job at Job Creators is so critical. I tell these guys, ‘I understand you don’t want your livelihoods and your businesses to sustain any damages.’ But at least give us an understanding of what’s happening, and we’ll cloak you.”