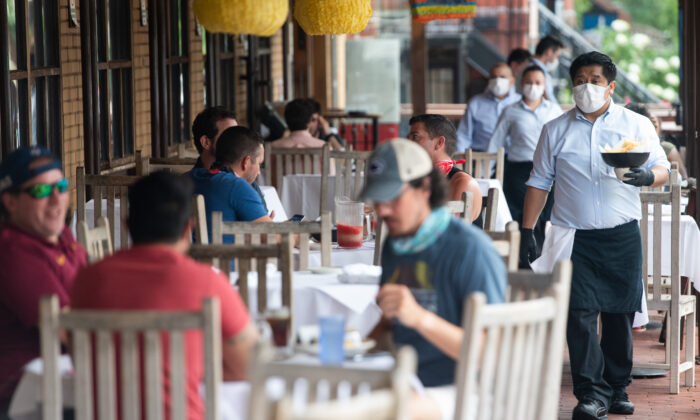 A waiter wearing a mask and gloves delivers food to a table to customers seated at an outdoor patio at a Mexican restaurant in Washington, on May 29, 2020. (Saul Loeb/AFP via Getty Images)
Inflation

Inflation has reached levels not seen in 40 years, placing a strain on household budgets as well as small businesses across the country.

According to a new poll of more than 500 small businesses, 6 out of 10 company owners in the United States fear that inflation will force them out of business. The survey also found that nearly 75 percent of respondents had raised their prices over the past year to keep up with the rising costs.

While many company owners have passed on price hikes to consumers, they’re concerned that this may cost them customers at a time when the economy is extremely unstable.

According to the poll, small firms increased their prices by 27 percent on average, far greater than the annual inflation rate of 8.5 percent recorded in March. However, more than half of respondents believe they’ve lost customers as a result of boosting prices.

“Small businesses will typically have less negotiation leverage with suppliers and less ability to pass along higher operational costs to customers,” he told The Epoch Times. “They are exposed to a more pronounced profit squeeze compared to larger businesses, consequently.”

Smaller businesses will also have fewer choices for mitigating the costs of inflation, Winegarden said, creating extra financial vulnerabilities for them.

Similar problems were echoed by the survey of small-business owners conducted by the National Association of Independent Business, which showed that hopes for a better business climate in the next six months had dropped to an all-time low. Inflation has surpassed “labor quality” as the top issue facing small firms, according to the survey.

“We’ve seen a significant decrease in sales compared to last year and the previous year,” says Jeff Neal, founder of The Critter Depot, a small business that sells composting worms and grubs for lawn and garden.

“It has us concerned, and we’ve spoken with other farms, and it sounds to be rampant in our industry,” he told The Epoch Times.

Neal believes that because inflation is so high, people are conserving what they can for food and shelter and eliminating all other expenses.

Annual inflation in the United States accelerated to 8.5 percent in March, the highest level since 1981. The food index climbed 8.8 percent year-over-year, while the energy index was up 32 percent. And the cost of shelter advanced by 5 percent, which is one of the areas expected to keep rising in the coming months.

The producer price index, which tracks the average changes in selling prices from domestic production over time, also rose by an annual 11.2 percent rate last month, shattering hopes that inflation would subside in the coming months.

John Frigo, an e-commerce manager at BestPriceNutrition.com a small business in the dietary supplement industry says inflation and supply chain issues have harmed his company.

“For the past year across some brands we’ve seen four to six price hikes,” he told The Epoch Times.

“The thing that’s been the most obvious is creatine, which has always been a popular cheap supplement,” he said, adding that the price of creatine has risen by 250 to 350 percent in just a few months.

Economist Arthur Laffer, who was a top adviser to President Ronald Reagan, criticizes economists who claim that high inflation is a result of strong economic growth.

Inflation is a “big killer” of prosperity, Laffer told Fox Business on April 22. It harms economic growth over time as it’s “anti-production,” he said.

“And in fact, it can bring the economy to its knees in no time,” he warned, unless politicians and the central bank take immediate action.

Besides inflation, small-business owners are experiencing headaches due to labor scarcity and the ongoing “Great Resignation,” according to the U.S. Chamber of Commerce.

To assure continued recovery on Main Street, the chamber called on the Biden administration and Congress to reduce inflationary pressures on businesses and address the labor shortage crisis.

Nouriel Roubini, one of few economists who correctly predicted the global financial crisis and the U.S. housing bubble meltdown of 2008, warned that “the medium-term outlook is darkening.”

“There are many reasons to worry that today’s stagflationary conditions will continue to characterize the global economy, producing higher inflation, lower growth, and possibly recessions in many economies,” he wrote in a recent report.