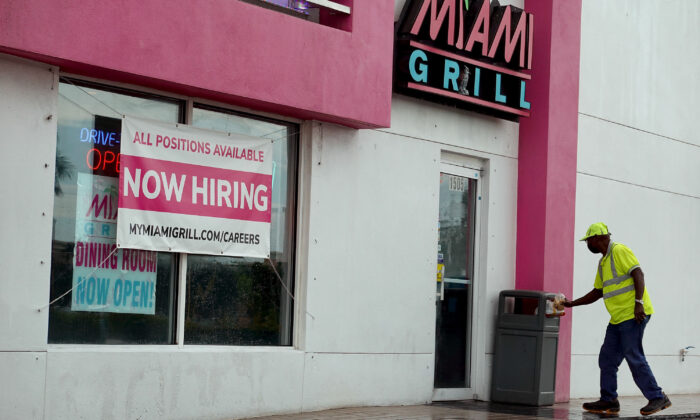 A Now Hiring near the entrance to a Miami Grill restaurant in Hallandale, Fla., on Sept. 21, 2021. (Joe Raedle/Getty Images)
Economy

Optimism among small-business owners edged down in October as firms faced inventory shortages and hiring difficulties forcing them to raise compensation at a historically high rate, according to the National Federation of Independent Business (NFIB).

The NFIB’s small-business optimism index fell by 0.9 of a percentage point to 98.2 in October, according to the group’s Nov.9 Small Business Economic Trends report (pdf).

The downtick in overall optimism came alongside a sharper four-point drop in the six-month-ahead outlook for business conditions to a reading of negative 37 percent.

“Owners have grown pessimistic about future economic conditions as this indicator has declined 17 points over the past three months to its lowest reading since November 2012,” the report reads.

The NFIB report showed that 49 percent of small business owners in October reported job openings that could not be filled, a two percentage point improvement from September’s reading, which represented a 48-year record high for the third consecutive month. The historical average for the NFIB’s unfilled job openings measure is 22 percent.

A net 44 percent of owners reported boosting wages to attract and retain staff, the highest reading in the 48-year history of the series.

“Small business owners are attempting to take advantage of current economic growth but remain pessimistic about business conditions in the near future,” NFIB Chief Economist Bill Dunkelberg said in a statement. “One of the biggest problems for small businesses is the lack of workers for unfilled positions and inventory shortages, which will continue to be a problem during the holiday season.”

The net percent of owners reporting inventory increases fell 3 percentage points in October to a reading of zero, while a net negative 4 percent reported higher nominal sales in the past three months, down seven percentage points from September.

Supply chain disruptions continued to frustrate small-business owners, with 39 percent reporting that bottlenecks have had a significant impact on their operations, while only 10 percent reported no impact.

The persistent effects of inflation were evident in the report, with the net percentage of owners raising average selling prices going up seven percentage points to a reading of 53 percent in October. A net 51 percent of owners said they plan to raise prices in the future.

“Price raising activity has reached levels not seen since the early 1980s when prices were rising at double digit rates,” the report reads.

Price hikes were most frequent in wholesale (78 percent), retail (72 percent), and construction (66 percent).

The NFIB’s small-business economic trends report comes as firms continue to struggle to keep and attract workers, boosting wages, and offering perks to bring in badly needed staff. The Labor Department said in a recent release (pdf) that average hourly earnings rose 4.6 percent in the year through September 2021, though the higher 5.4 percent rate of consumer price inflation over the same period means that, in real terms, wages contracted by 0.8 percent.

Job switchers saw their wages rise in real terms, however, with the most recent ADP Research Institute Workforce Vitality Report (WVR) showing that wage growth for people switching jobs—as opposed to new workforce entrants or existing jobholders—came in at 6.6 percent in the year through September 2020. This would mean job switchers saw their wages rise 1.2 percent in real terms over the year.

“With near-record job openings and high levels of individuals departing jobs, the balance of power has clearly swung into workers’ favor. This will likely be the case for as long as the recovery and expansion continue, and until we see the economy slowing more substantially or retrenching,” Bankrate Senior Economic Analyst Mark Hamrick told The Epoch Times in an emailed statement.

The U.S. economy expanded at a lackluster 2 percent in annual terms in the third quarter of this year, the Commerce Department said in an Oct. 28 release. The deceleration from the 6.7 percent rate of GDP growth in the second quarter was driven chiefly by a slowdown in consumer spending.