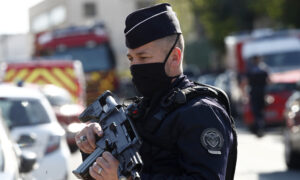 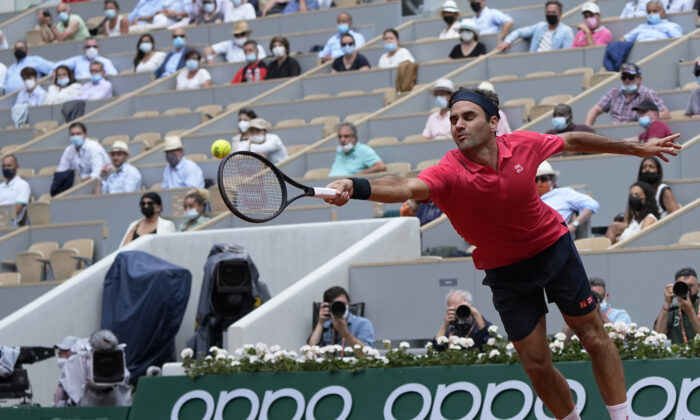 Switzerland's Roger Federer attempts to return serve to Croatia's Marin Cilic during their second round match on day 5, of the French Open tennis tournament at Roland Garros in Paris, France, on June 3, 2021. (Michel Euler/AP Photo)
Tennis

Slowing Down? Federer Says No as He Advances at French Open

When the 39-year-old Federer drew a time violation Thursday at the French Open for not playing fast enough, he protested to the chair umpire and to his opponent, Marin Cilic.

The warning in the second set came after Cilic twice complained to the chair that Federer wasn’t getting ready to receive serve quickly enough.

“Marin, am I playing too slow?” Federer said. “I understand the rule. I’m going from one corner to the next trying to get my towel. I’m not doing it on purpose.”

Federer, a 13-time winner of the ATP’s annual sportsmanship award, pointed out that he has played little since the coronavirus pandemic prompted changes in procedure between points, and players now fetch their own towels.

“It was a misunderstanding on many levels,” Federer said later. “First I didn’t understand what was going on. I did not know he was upset.”

With a chuckle, Federer added, “I guess I’m new to the new tour. It got a little energy into the match, which I like.”

The dispute delayed play for more than three minutes and seemed to unsettle Federer for the rest of the second set, but he regrouped and won, 6–2, 2–6, 7–6 (4), 6–2. The victory advanced Federer to the third round at Roland Garros, his first major tournament in 16 months.

Federer showed in the third set that he harbored no lingering hard feelings toward Cilic, conceding a point he didn’t lose.

On the first point of the pivotal tiebreaker, Cilic hit a serve near the line and Federer conceded it as an ace. The umpire climbed out of his seat and called the serve long, but Federer gave Cilic the point anyway. Replay showed the ball was long.

Former U.S. Open champion Sloane Stephens beat a top-10 player for the first time in 2 1/2 years—and it was the same player as last time.

Stephens’ last top-10 win came against Pliskova in the WTA Finals in Singapore in late 2018.

At No. 59, Stephens is ranked outside the top 50 for the first time since 2017, but she’s always dangerous on clay. She was the runner-up at the 2018 French Open and made the quarterfinals in 2019.

No. 5-seeded Elena Svitolina says she and her fiancé, former top-10 player Gael Monfils, don’t argue about tennis —or anything else.

“He always has to agree with me, you know,” a grinning Svitolina told the crowd during a post-match interview Thursday, “because I’m the boss in the house.”

A three-dimensional painting of Rafael Nadal packaged with a digital token of the image in motion shows him playing in the 2014 French Open, which he won.

The 3D image is on multiple layers of plexiglass, and each of the 300 physical paintings from Sulzberg Sports Media & Fine Art is signed by Nadal.

Proceeds from sales will benefit the Rafa Nadal Foundation.