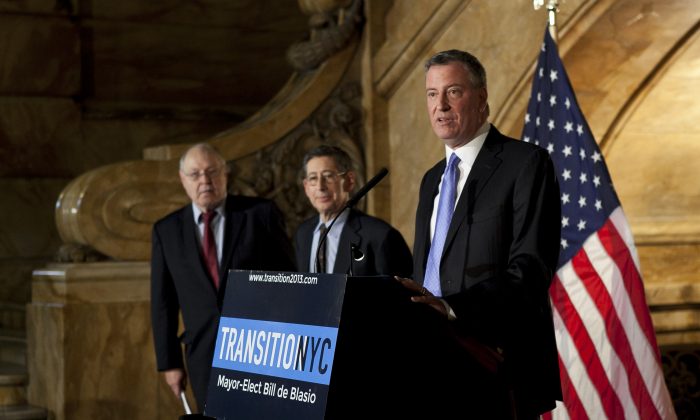 NEW YORK—Praised for the speedy launch of his transition team and for the unique process that the transition followed, the new mayor of New York City Bill de Blasio has been slow in making appointments to his administration.

By the time previous mayors took the oath of office, Ed Koch had made about 17 major appointments; David Dinkins, about 20; Rudy Giuliani and Michael Bloomberg dozens.

De Blasio had 15 appointments taken care of prior to his inauguration of New Year’s Day.

Steven Malanga of City Journal called it “one of the slowest transitions to new leadership in recent memory.”

There are nearly 50 agency heads to appoint. De Blasio has said the appointment process is likely to continue through to the end of January. In the meantime, he has asked Bloomberg’s appointees to stay on.

De Blasio has been criticized before for being slow in making decisions. The New York Times reported this summer that former colleagues who worked with him on the Hillary Clinton campaign for Senate in 2000 said it was likely de Blasio was replaced as campaign manager for this very reason. He just wasn’t fast enough or dynamic enough at getting things done in high-pressure situations. He was seen as more deliberative.

De Blasio has been rather unapologetic about the pace of the process, asserting repeatedly that he is more concerned about getting his choices right.

“We sought progressive leaders with the depth and know-how to take on these challenges, and we have built a phenomenal team that is ready to take on a bold agenda,” de Blasio said on Dec. 31 after making five key appointments just hours ahead of his inauguration.

De Blasio affirmed Wednesday that Sanitation Commissioner John Doherty of the Bloomberg administration, as well as commissioners of the Fire Department and the Office of Emergency Management were definitely staying on to handle the snow.

Another key appointment is Carmen Fariña as schools chancellor. The 70-year-old woman is skeptical of standardized testing and is likely to try to slow that process, which under Bloomberg’s leadership tended to move quicker than the system was comfortable with.

Perhaps most interesting is de Blasio’s defense of Bloomberg holdover Kyle Kimball as president of the quasi-governmental New York City Economic Development Corporation, which handles the majority of the city’s development projects.

The pace of development under Bloomberg has long been a sore spot for New Yorkers concerned that the middle class and those living on or near the poverty level are getting priced out of the city.

De Blasio promised that Kimball was committed to his progressive vision for the city and would implement it with a “full heart.”

Kimball also pledged his affirmation for de Blasio’s vision: “It’s our charge to do everything in our power to address rising inequality. We will do it by making every economic development dollar go further, and by investing in new career paths and emerging industries that will lift New Yorkers up.”

Despite the criticism he has taken for appearing a tortoise, de Blasio may have just maneuvered a feat of political brilliance. By selecting those appointees who fit his vision, and following it up with an inaugural speech that drives his points home, the new mayor has established his commitment to getting done what he has promised.

“When I said we would take dead aim at the Tale of Two Cities, I meant it. And we will do it,” he said Jan. 1, his first day on the job.

Slow But Sure: De Blasio’s Appointments

De Blasio on Bratton
“I believe repairing relations between police and the community they serve is the key to making our city even safer.”

De Blasio on Fariña:
“Taking on the lives of 1.2 million kids might be one of the most sacred missions that exists in government anywhere in this country, so I had to be 100 percent sure that not only was there enough talent, experience, and temperament, but also the philosophy.”

De Blasio on Shorris:
“I want everyone to know where the buck stops … it stops with Tony Shorris.”

De Blasio on Wolfe:
“I have worked with a stunning array of political figures in the last quarter century. There are very few minds I have ever met that could compete with Emma Wolfe.”

“I have spent the bulk of my career to help the poor. It is incredibly exciting for me to be in an administration that will make that a central tenet, not just an afterthought.”—Lilliam Barrios-Paoli

Linn is tasked with leading the administration’s efforts to resolve outstanding labor contracts.

Fuleihan will be charged with helping to construct a budget that protects core services in the face of declining federal support and shift corporate tax subsidies to strategic investments in institutions like CUNY, among other tasks.

De Blasio on Carrion:
“We are driven by the same fundamental belief that we cannot leave a single family or child behind.”

De Blasio on Carter:
“The first time I met with him, I was convinced on the spot that we had chemistry, the communication, the shared values. … My vision for his office, as with all parts of government, is a progressive activist corporation counsel’s office.”

De Blasio on Glen:
“We need to invest in key emerging industries and affordable housing so New Yorkers have a better shot at working their way into the middle class. Alicia has the record, fresh ideas, and bold outlook to make that vision a reality.”

Kimball is tasked with leading “efforts to develop new career paths that lift New Yorkers into the middle class,” according to de Blasio’s Transition Team.

De Blasio on Williams:
“He has been indispensable, one of the most important voices in my entire operation on policy and strategic planning,” de Blasio said about Williams. “I am convinced in his new role he will be at the center of every major decision we make.”