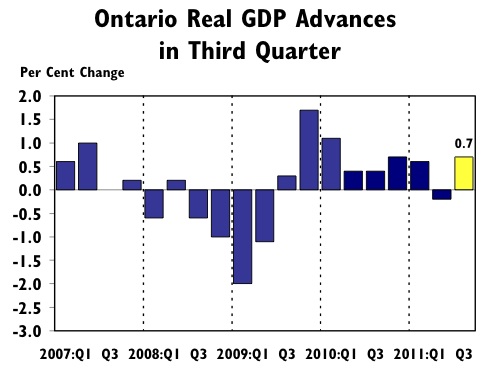 Quarterly GDP in Ontario since 2007. (Ontario Ministry of Finance)
US

Slowdown Predicted for Canadian Economy in 2013

A CIBC economic forecast is projecting a slowdown in the Canadian economy in 2013 as the country becomes more dependent on the global economy in the new year.

“Having earlier tapped fiscal stimulus and a housing boom to shelter the economy from sluggishness abroad, the country’s ability to set its own course is now much more limited,” Avery Shenfeld, chief economist at CIBC, said in a press release.

This means that Canada’s economy will depend on “foreign hands,” with exports and associated capital spending playing a defining role next year, says CIBC.

But with the global economy still looking bleak, Canada’s economy will experience a slowdown in 2013.

“It’s too early to get the full benefits of policy stimulus in Asia, Europe is too stubborn to soften its fiscal drag enough and amplify ECB bond purchases, and Washington is too wedded to getting going on fiscal tightening stateside, if not the full fiscal cliff,” said Shenfeld.

However, Shenfeld projects a recovery in the following year in the U.S. and other global markets.

“With its household sector healing, the U.S. should be positioned to lead the way towards a better year come 2014 if, as we expect, new fiscal tightening measures do not hit as deeply that year,” he said.

He also said interest rates are likely to hold steady in Canada through 2013, but predicts that Bank of Canada Governor Mark Carney’s successor will increase interest rates in 2014.