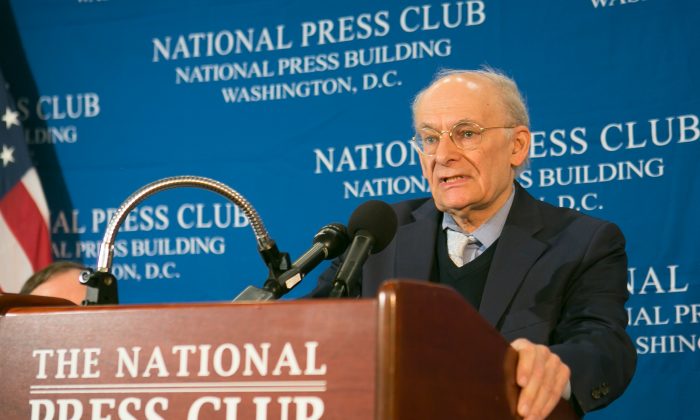 WASHINGTON, D.C.—The authors of a new report about state-led organ harvesting in China presented their findings at the National Press Club on June 22, calling it a “slow motion genocide” that has led to likely over 1 million organs removed from unwilling donors.

“This fits the pattern of King Leopold and the Congo, and the genocides in Cambodia and Darfur,” said David Kilgour a former Canadian secretary of state and a co-author of the new report.

King Leopold of Belgium wrought a death toll of tens of millions running a slave trade in the Congo, researchers suspect, while in Cambodia and Darfur, Sudan, class and ethnic cleansing massacres with vast death tolls were carried out by the government and militia.

The study is titled “Bloody Harvest/The Slaughter: An Update,” and builds on the previous work of the authors.

The report says that Chinese hospitals across China have transplanted roughly between 60,000 and 100,000 organs per year since 2000. The death toll of all this activity is unclear, though according to the statements of Chinese doctors, it is likely that in the majority of cases one transplant equaled one death.

“The ultimate conclusion of this update, and indeed our previous work, is that China has engaged in the mass killing of prisoners of conscience, primarily practitioners of the spiritual based exercises Falun Gong and others… in order to obtain organs for transplants,” said David Matas, a Canada-based international human rights lawyer who has investigated the issue for a decade, and a co-author of the report.

“We’re going through over 700 hospitals, some of them in great detail,” Matas said. “We reach the Chinese official figure by looking at the volume in just a few hospitals. We’re dealing with a multiple of that here. Many of the hospitals are relatively new, or have new transplant wings or beds. That wouldn’t have happened without confidence in continued supply.”

Ethan Gutmann, a journalist and the third co-author of the report, remarked that the number of hospitals capable of thousands of transplants a year is staggering. “The pictures are breathtaking. They show medical staff that look like football teams advancing down the field.”

As the leader of the Renji Hospital’s Liver Transplant Centre, Xia Qiang, said in 2005: “The management of my team is militarized. Every medical staff member must keep their cell phone turned on 24 hours a day, because liver transplants may require going out for graft procurement or preparing for surgery at any time. We doctors must be on standby at all times.”

“What we see is the transplant industry expanding over time,” Matas said. “Organ supply has never been a problem—the limitations of the system have been doctors, hospitals, beds, nurses, training. So the number, year-by-year, has been growing because the hardware and capacity, not the organ availability, has increased.”

When the authors were asked whether they regarded their findings as genocide, Gutmann said: “I use the ‘G’ word. Genocide… has a definitive meaning in human rights. If it’s an attempt to kill off a people then, yes, we’re looking at that. It’s a slow-motion genocide; a drip, drip, drip, genocide.”

He continued, at a later point during the press conference: “Our ultimate conclusion, aside from the fact that there is a huge number of transplants going on, is that China has a duty to explain what’s going on here.”