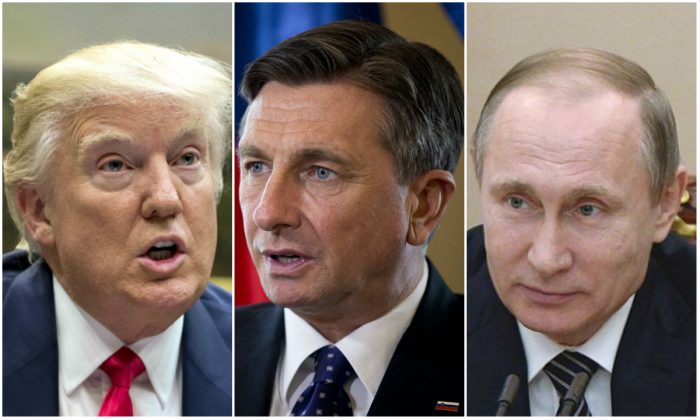 President Donald Trump in the Roosevelt Room of the White House in Washington on Feb. 27, 2017; Slovenia's president Borut Pahor during an interview with the Associated Press in Ljubljana, Slovenia on March 6, 2017; Russian President Vladimir Putin chairs a meeting with heads of Russia's oil companies at the Kremlin in Moscow, on March 1, 2016. (AP Photo/Pablo Martinez Monsivais; AP Photo/Darko Bandic; Alexei Nikosky/AFP/Getty Image)
International

LJUBLJANA, Slovenia—Slovenia’s president said Monday his invitation to host a summit between U.S. President Donald Trump and Russian President Vladimir Putin still stands despite allegations of the Kremlin’s meddling in the American elections.

Borut Pahor told The Associated Press that a “tradition” of first meetings between U.S. and Russian presidents in the small Alpine state shouldn’t be discarded—and Slovenia is also the U.S. first lady’s native land.

In June 2001, U.S. President George W. Bush and Putin had their first face-to-face meeting in Slovenia to explore the possibility of compromise on U.S. missile defense plans that Moscow opposed.

“Slovenia has officially expressed readiness … it is ready to be the host of this meeting,” said Pahor, whose country is a member of the EU but has traditional ties with Russia. “They would be welcome in fine atmosphere.”

“Probably it would be attractive for the president of the United States because the first lady is from our country,” Pahor said. “I wouldn’t be surprised if they decide differently, it’s their decision.”

Putin has said Slovenia would be a good venue, but added that it’s not only up to him.

“He was polite, but his answer wasn’t final,” Pahor said.