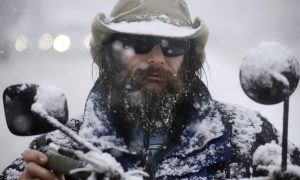 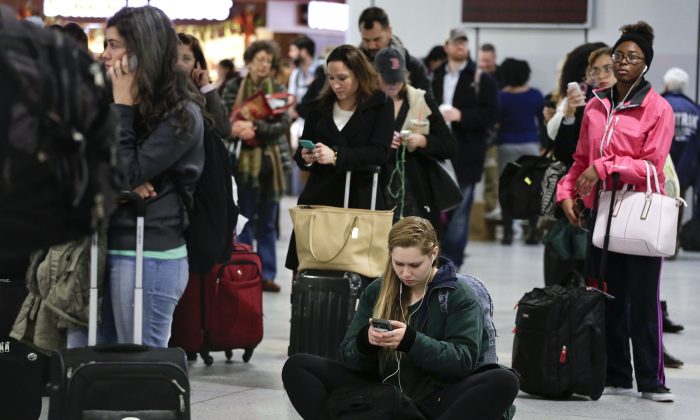 Thanksgiving holiday travelers at Penn Station in Manhattan, N.Y., on Wednesday, Nov. 26, 2014. One of the busiest, most stressful travel days of the year posed special challenges in the crowded Washington-to-Boston corridor as travelers on their way to Thanksgiving celebrations contended with a nor'easter packing rain and snow. (AP Photo/Julie Jacobson)
New York

MINEOLA, N.Y.—Rain and snow rolled into the Northeast on Wednesday as millions of Americans made the big Thanksgiving getaway, grounding hundreds of flights and turning highways sloppy along the congested Washington-to-Boston corridor.

By early afternoon, more than 550 flights had been canceled, the bulk of them in the Northeast. Thousands of flight delays on what is easily one of the busiest travel days of the year were also expected as the snow spread.

Some travelers tried to change their plans and take earlier flights.

West Point cadet Jameson Albers originally had a 5:30 p.m. flight home to Nashville from New York’s LaGuardia Airport. “I bumped my flight to an 11:30 flight to try to get in before the really bad weather hits,” he said.

Major Northeast cities were likely to see moderate to heavy rain most of the day, though New York was expected to see 1 to 4 inches of snow, and its northern suburbs 6 to 8 inches, the National Weather Service said.

Higher elevation west of the Interstate 95 corridor was expected to see as much as 6 to 12 inches before the nor’easter exited Wednesday night.

“Right now, we don’t see snow as a big issue in most of the major cities like Washington, Philadelphia, and New York,” meteorologist Bruce Sullivan said.

Dan Albert hoped to beat the snow as he, his wife, and 15-year-old daughter refueled their SUV Wednesday morning along I-81 in Hagerstown, Md., about halfway between their Greensboro, N.C., home and their Thanksgiving destination in Mahwah, N.J.

“Traffic was fine last night, no problems at all, but today’s going to be a real booger,” Albert said. But he added: “Got to see the folks. We only get to see them once a year. Got to muscle through it, right?”

By early afternoon, airlines had canceled more than 10 percent of their flights at Philadelphia, Newark Liberty, and LaGuardia airports.

Major airlines waived their re-booking fees for people flying in and out of the Northeast, allowing passengers to try to catch an earlier flight. But most planes were already filled.

The wintry weather was not confined to the Northeast. An Alberta clipper left many highways in North and South Dakota slick, and a winter storm warning was issued for parts of Minnesota.