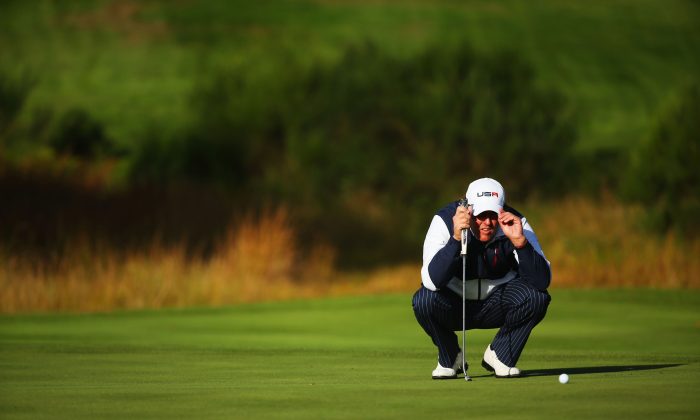 Phil Mickelson lines up a putt on the sixth green during the Morning Fourballs of the 2014 Ryder Cup on the PGA Centenary course at the Gleneagles Hotel on Sept. 26 in Auchterarder, Scotland. (Mike Ehrmann/Getty Images)
Golf

For the second consecutive year the United States Golf Association (USGA), the governing body for golf throughout North America, convened a symposium at its Far Hills, N.J., headquarters in dealing with the topic of slow play. The need for the discussion and serious action is as clear as can be. Golf as a sport in the United States has flat-lined and the resulting drop in the supply chain has seriously impacted the glut of courses that cannot keep their respective tee sheets full on a steady basis.

Slow play is greatly influenced by what people see on television from the world’s finest players. It’s truly amazing that rounds of professional golf can exceed five hours even when such play is bolstered in having a sea of people watching balls and assisting players at every turn. The crawl of play at the highest level has seeped into the regular golf population in the same manner as an infectious disease.

Simple solutions such as penalizing players for repeated infractions has not happened and, as most people know, if you don’t back up what you say by the necessary enforcement all the chatter about moving play becomes just that—chatter.

In the history of major championship golf there have been only a few instances of when players were actually penalized. At the 2013 Masters then 14-year-old Chinese standout player Guan Tianlang became the youngest player ever to make a cut in a major event and the first person penalized for slow play in the history of The Masters. One has to wonder: has the Masters never had a slow play situation since it started hosting the event in 1934? And what kind of signal does it show when you apply your first penalty to a youngster when others have been doing likewise or even worse and yet escaping such penalties?

Ironically, given the fact the USGA has now hosted back-to-back symposiums on slow play one would wonder how many times the association has ever penalized players for slow play in its biggest event—the U.S. Open? It has done so. But just twice. Both of whom are not exactly household names—Robert Impaglia for two strokes at the 1978 Open at Cherry Hills and Edward Fryatt at the 2007 Open at Congressional.

The last time a PGA Tour event slapped a two-stroke penalty for slow play was back in 1995 at Honda Classic when Glen Day—nicknamed “all day” because of his tortoise movements—was penalized.

You can see the point clearly.

Talk is cheap, penalties get people’s attention. Applying penalties should not be concentrated simply on the low-level players who aren’t prominent. Want to get total attention? Start with the big name players who routinely crawl around the course. When that is done the message gets to others in the field and eventually the message rings even louder among golfers throughout the land that slow play is not going to be tolerated.

The issue also has plenty to do with how the PGA Tour provides penalties for players who violate Tour guidelines—even beyond slow play. The penalties are never announced publicly, so no one ever really knows who was fined and for what amount. Why the need for such secrecy escapes me. Public exposure would provide a bit of embarrassment for such top-tier stars.

The symposium provided reams of information on how and when to time players but when all the smoke clears, the main issue is enforcement. Backing up matters to show action will be taken when warranted. A great example of retreating on slow play took place at the 1981 U.S. Open. Two players from a threesome were deemed responsible for being more than 20 minutes behind the group in front of them. Then USGA Executive Director P.J. Boatwright Jr. slapped two shot penalties on John Schroeder and Forest Fezler. Both men appealed to a four-man Rules committee—of which Boatwright was one—and the committee overturned P.J. by a vote of 4–1. So much for standing behind your key man.

No doubt golf is not simply influenced along at the highest levels of competition, at the club level more can be done too. Bill Yates—founder of Pace Manager Systems, based in Pebble Beach, Calif., and one of the most innovative thinkers on the subject—said it best during the symposium. For any serious dent to take place on hastening the pace of play, the initial emphasis rests with management of any golf facility. Management has the keys to the course and if the folks running the show acquiesce, they invariably hand the keys to the inmates. Well, you know the rest.

Clearly, when people are approached and told they need to pick up the pace, the natural reaction is either some sort of denial or blaming others. Too many players are not prepared to play when it’s their turn. These same players are more often than not determined to finish a hole when in reality they should have pocketed the ball and moved on to the next hole when they have scored double the par. Golf is a highway and everyone is dependent on the group in front of them to keep the flow moving. Courtesy counts. So does respect for others.

Management can do a great deal by providing the proper intervals between groups. Place too many groups on the course at one time and the result is gridlock. Spacing them out allows for a continuous flow of play and with that a sense of enjoyment for those on the course.

When I first started to play, my father insisted I know the rules of the road—before venturing on to a regular course. His motto was a simple one: it’s OK not to play well, but always be in position to play and never slow down the parade. Etiquette is the first part of the USGA Rules Book. Too many players today are clueless on what their responsibilities are when playing. If you’re a golfer and you patronize a facility that allows tortoise-like conditions to happen frequently, ask the management what they plan on doing. If the answer is less than satisfactory, take your dollars elsewhere. Your time and your money have value. If the people receiving that benefit don’t appreciate it then possibly your absence—as well as others—will have them awake from their self-induced coma.

The USGA has already outlined a marketing effort with the slogan: “While we’re Young.” It’s a phrase uttered by the Rodney Dangerfield character from the hit movie “Caddyshack.” Other initiatives such as “playing it forward”—whereby tee positions are moved up so players can play courses with reasonable lengths—can also be helpful.

Ultimately, management sets the stage for what likely happens, or doesn’t happen.

At the highest level it’s long overdue for the various key golf groups—PGA Tour, LPGA Tour, USGA, European Tour, etc., etc.—to let all players know that pace of play is too important and will not be violated without consequences.

The USGA’s symposium was much on talk and applying various numerical models to measure play. The real issue is the inertia is taking the bull by the horns through a combination of education and enforcement. Wasting time on a golf course simply standing around will only mean more ghost signs on other courses as they see more and more players opt for other pursuits. That’s not a solid future, it’s a dead end certainty.