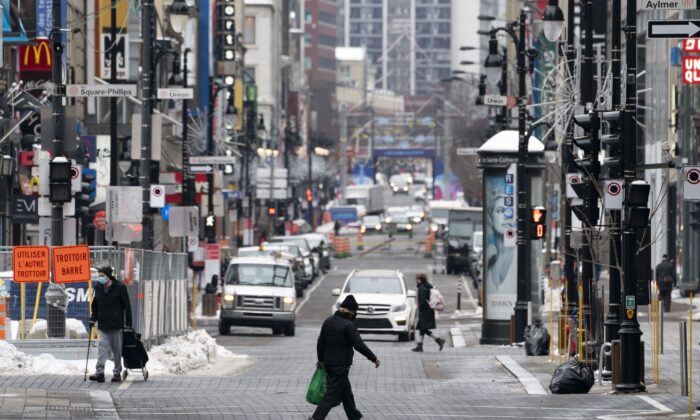 A quiet Saint-Catherine Street in Montreal under Quebec's new COVID-19 lockdown measures, including a curfew, on Jan. 11, 2021. (The Canadian Press/Paul Chiasson)
Canada

Sleeping Through the COVID-19 Pandemic

Everyone knows that Canada is in trouble. Like other countries, this country has been racked by various waves of COVID-19 for almost two years.

But COVID-19 is not the most troubling issue. Let me explain.

Remember at the beginning of the pandemic, we didn’t expect multiple waves of the virus to infect millions of Canadians. At that time, when officials asked us to lock down for two weeks to “flatten the curve,” we thought “no problem!”

Some officials told us that if we didn’t follow their edict, we would cause our grandmothers (or some other old people) to get sick and die.

Now we realize that this was a threat that incited fear in the minds of at least some Canadians. Who would want to be responsible for infecting old, vulnerable people?

Not only did government and health-care officials make us fearful, they downplayed other important considerations. Officials subverted evidence-based advice in favour of political-based proclamations. More seriously, they downplayed the fundamental ethical principles of the medical profession, primum non nocere, or “do no harm.”

To understand what has happened during this pandemic, we need to think back to September 2019. At that time, some infectious disease specialists met under the auspices of the World Health Organization to review and update the protocol for non-pharmaceutical interventions (NPI) for influenza epidemics and pandemics.

Significantly, the updated NPI guidelines didn’t recommend “lockdown” for stopping epidemics or pandemics. But it seems that both governments and medical professionals forgot this advice when COVID began.

One of the first policies these well-meaning officials used was lockdowns. Surprisingly, neither journalists nor academics objected to this poorly-considered and costly policy.

Now we know that the lockdowns, vaccinations, masks, and social distancing did not stop the spread of COVID-19. Not only are the unvaccinated spreading the virus, but so are the vaccinated.

The Omicron strain is spreading even faster than the previous strains. In fact, this variant is moving through the population at an exponential rate, and some officials have predicted that virtually every Canadian will be infected by the end of February.

More seriously, lockdowns have caused untold harm. Thousands of urgent surgeries have been postponed, many cancer patients have not been diagnosed or treated, and many children who were abused at home have not been identified by their teachers because the schools were closed.

It seems that the governments and medical professionals did not trust citizens to do the right thing. Perhaps because of their lack of trust, these officials put a political spin on their recommendations, beginning with words designed to stall debate: “The science shows that Canadians must…”

These recommendations undermine the principles of freedom, informed consent, and full disclosure—principles that are fundamental to Canadian democracy. Freedom of thought, movement, and association are enshrined in the Charter of Rights and Freedoms, all guaranteed protections that have been violated by the lockdowns.

Now, the evidence is quite clear. This virus is most dangerous to people over 60, and especially to those with seriously compromised immune systems. The virus is not as dangerous as the seasonal flu to young, healthy Canadians. But the vaccines are not absolutely safe. There have been serious adverse effects reported, so there are pros and cons and people have to make their own medical decisions and consult their doctors.

Over a year ago, professors Jay Bhattacharya from Stanford University, Sunetra Gupta from Oxford University, and Martin Kulldorff from Harvard University published the Great Barrington Declaration, arguing that resources should be focused on the most vulnerable people and not spread over the whole population. Over 60,000 scientists and MDs have signed this declaration. More recently, Andrew Pollard, one of the creators of the Oxford-AstraZeneca vaccine, also recommended targeting the vulnerable.

These experts recommend that most people should be free to live, go to school, and work as they wish. If people become ill, of course, they should isolate themselves and try not to infect others.

Unfortunately, these contrary-minded scientists and other experts have been marginalized by both the medical establishment and governments. Not listening to world-recognized health policy experts who want to remind officials of the WHO protocol is not a good way to implement effective health-care policies for Canada.

So far, it seems that most Canadians have been sleeping through the epidemic because they have not considered alternative perspectives. Now they are beginning to wake up, so it seems, and many seem to realize that governments and the medical establishment have been deceiving them.

Such deception undermines the trust that Canadians have in both governments and health-care professionals. Deception is, in fact, more serious than COVID-19 because there is no vaccine to counter that epidemic.