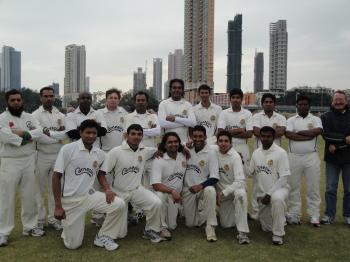 By David Bryceson
Print
Hong Kong’s Carnegie’s Sri Lankans Cricket Club (SLCC) gave a lesson on how cricket should be played last weekend. Meanwhile, their chairman had more than just admiration for his team to share regarding the state of cricket in Hong Kong.

The youngest club of the Premier League, organised by the Hong Kong Cricket Association (HKCA), handed defeat to the Sunday League runners-up Pakistan Association (PA) and the Defending Sunday League Champions JKN Little Sai Wan (LSW) – they chased 227 in 29 overs and 286 in 34 overs respectively in the 50 over league.

“I’m so proud of my boys and this should not just be a defeat for the senior and National players of both teams, but should be a lesson for them to improve their skills,” Chandrin J. Dissanayake, the Founder/Chairman and Captain of the Carnegie’s Sri Lankans Cricket Club, said in a statement to The Epoch Times.

LSW and PA, who collectively boast 79 per cent of the Hong Kong National team, had no clue on how to stop the extraordinary performance of the Carnegie’s SLCC players, which questions some selection choices by HKCA. Having said that, when 11 of the 14 take to the field, Roy Lansam of Kowloon Cricket Club is the only likely non-LSW/PA player to be included and he is half Chinese.

This comes as Hong Kong prepares for the upcoming 2011 ICC World Cricket League Division 3, which it is hosting next week. Rumours swell as many believe that the national team has problems – ones that are not in the interests of putting the best HK representative XI on the pitch.