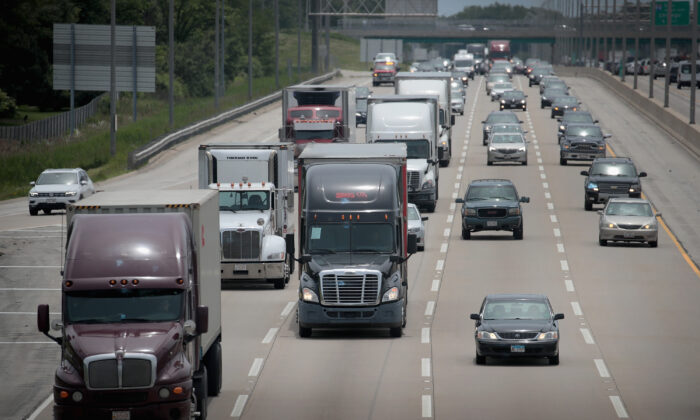 “This declaration will help America’s commercial drivers get these critical goods to impacted areas faster and more efficiently,” said Jim Mullen, acting administrator of the Federal Motor Carrier Safety Administration in a statement the day of Trump’s declaration.

Americans for Tax Reform (ATR) hailed the decision because, the group stated, “such rules impose a top-down, one-size-fits-all approach to regulation where bureaucrats in Washington mandate when drivers must take a break from driving, rather than relying on professional drivers to make that decision for themselves.”

The trucking decision was just one of nearly 200 examples of state and federal regulations that have been relaxed in recent weeks as officials coping with the pandemic bypassed time-consuming red tape to get ventilators, face masks, virus tests, and other desperately needed resources.

Perhaps nowhere was the need for such bypassing illustrated more vividly than in Seattle, Washington, when the illness first gained presence in the United States.

“They had to sit on their hands for three weeks while they got permission from agencies in Washington to do what was obvious, which was to begin testing people right away and begin to contain the virus,” Howard said.

Howard, author of “Try Common Sense” published in 2019 and the best-seller “The Death of Common Sense” in 1995, also pointed out that “regional medical schools and hospitals weren’t allowed to develop their own tests unless they got approvals that took more weeks.”

Officials were forced to “thread the eye of the Washington needle before anybody could act and, in this case, it had tragic consequences, as thousands of people have died,” he said.

Dozens of bureaucratic obstacles have been moved aside. At latest count, according to ATR, 193 state and federal rules have been relaxed or waived due to the pandemic.

Among the pandemic’s long-term consequences may be a shift in the “Overton Window,” an analytical concept developed in 1995 by Joseph Overton, a vice president of the Mackinac Center for Public Policy.

The Overton Window covers the range of policy options that are widely supported by the public. Options outside of the window exist, but officials are reluctant to endorse them.

But public opinion shifts over time, so the Overton Window moves as well, and ATR’s Grover Norquist thinks the response to the pandemic is one such time.

“We have certainly opened the Overton Window and shown folks that allowing medical professionals to move quickly and seamlessly across state lines is safe and useful,” Norquist told The Epoch Times on April 7.

“I believe that one will become permanent and lead to further relaxation of state occupational licensing,” he said, adding that, “heck, if you can do it for doctors, why not hair-dressers, barbers, real estate agents?”

Norquist was referring to Secretary of Health and Human Services Alex Azar’s decision to temporarily waive federal requirements that health care providers, including doctors, be separately licensed in every state in which they may practice.

Clyde Wayne Crews of the Competitive Enterprise Institute (CEI) is also tracking regulatory relief being implemented due to the pandemic. As the author of CEI’s annual compendium, “10,000 Commandments,” Crews is among the nation’s top experts on the cost of government regulation. He estimated that “the hidden tax” of federal regulation cost the nation $1.9 trillion in 2019.

Crews believes the time may be ripe for more systematic efforts to make permanent many of the temporary waivers and modifications, possibly by way of creation of a congressional commission.

“There can be some real impetus to do a commission in the wake of this health crisis because now there’s an economic crisis on our hands, too, and a commission is a way to deal with that, plus it’s already bipartisan,” Crews told The Epoch Times on April 8.

Howard notes that the negative results of burdensome regulators is felt far beyond the health care sector of the economy.

“In fact, teachers and doctors and nurses and business managers experience this every day, where a teacher is not allowed to maintain order in the classroom because we have a system that is so imbued with distrust that we require practically a legal trial to get the disruptive kid out of the classroom,” Howard said.

“We’ve created a system that is so obsessed with avoiding error that it doesn’t allow success,” he said. “We’ve institutionalized failure in the name of doing things correctly. We have people tip-toeing through the day instead of being Americans and solving problems.”

Howard contends the nation’s regulatory approach should instead be based on a premise he calls “guided discretion,” which “has a presumptive rule that you’re allowed to violate the rule or act differently in certain circumstances.”

A foster care program social worker wouldn’t, for example, be told specifically how to handle certain situations but could deviate as long as they can explain and justify their actions, he said.

Howard sees an opportunity to move in that direction in the present crisis through creation in the White House of a recovery authority with power to slash wasteful and unneeded regulations throughout the economy.

“Regulation is no different from the rest of human affairs. It requires judgment to be sensible, and we’ve tried to create an automatic system where everything is laid out, and it happens to be paralytic,” Howard said.