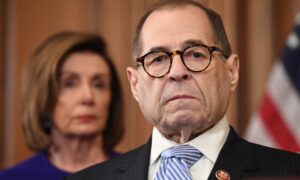 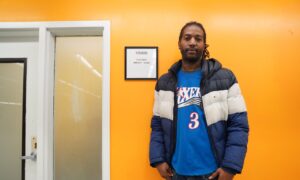 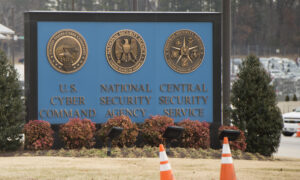 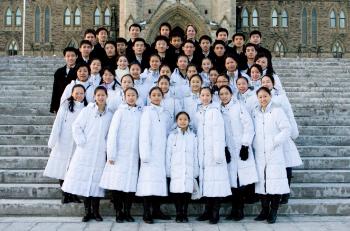 Shen Yun performers pose for a photo on the steps of Parliament Hill in Ottawa on Tuesday, the day the first slash on their bus tire appeared. (Samira Bouaou/The Epoch Times)
US

By Jason Loftus
FONT BFONT SText size
Print
Ottawa police are investigating after a bus driver for the Shen Yun Performing Arts company discovered slashes on a front tire that could have led to a serious accident.

The driver, Mr. Liang, discovered a mark on the sidewall of his bus's right front tire on Jan. 12 during a routine safety inspection. The bus was outside the downtown Ottawa hotel where the Shen Yun performers were staying following three shows at the National Arts Centre.

The bus carries about 50 dancers and musicians between cities on tour. The Shen Yun company is reviving traditional Chinese arts and culture through its stage performances on five continents.

Mr. Liang said he did not realize that the two-inch mark he found on the tire's sidewall was made by a blade, but he decided to bring the vehicle in for inspection after completing the 200-km drive to Montreal the next day.

When he brought the bus to Motor Coach International in Montreal on Jan. 13, service personnel discovered—beneath the snow and dirt on the same tire—a second, larger cut of at least four inches.

"They told me these were blade cuts and that this was dangerous," Liang said. "They said because it's a front tire it's very critical. If the tire bursts, the bus will lose control."

If a tire is slashed all the way through, the tire goes flat and the vehicle can't move, and injuries to people are unlikely. However, if a tire is carefully slashed through only some layers of the rubber, the tire may blow while the vehicle is moving, which could cause serious injury.

The incident was reported to Ottawa police and is now being investigated by its hate crimes unit.

Constable Jean Paul Vincelette, media communications officer for the Ottawa police, said it was not clear if someone cut the tire part way in hopes it would burst while traveling or simply did not have the tools to cut all the way through, which can be very difficult to do.

"What is important here is nobody got hurt," said Vincelette.

The officer said it was very early in investigation and police would be checking for any video camera footage.

Mr. Liang says it's the second time his bus has faced such an attack. Last year, en route from Phoenix to California, a tire burst. When Mr. Liang brought the bus into a service centre, staff there found that a drill had been used to bore a hole through half of the tire's depth. Liang says that case was less worrisome because it was a rear wheel, whereas this time it was a front tire.

"As a bus driver, we all know that the front wheel is the most important. If one bursts while at high speed, it's almost impossible to control the bus."

Shen Yun is billed as the world's premier Chinese dance and music company, with shows gracing the stages of many of the top theatres in over 100 cities. The company promises a renaissance of traditional Chinese arts, including classical Chinese dance, ethnic, and folk dance, depicting China's various eras and ethnicities.

But the New York-based company is independent from the Chinese regime and has angered Beijing with some performances, including a dramatization that depicts the resolve of a Falun Gong practitioner facing persecution by Chinese authorities.

The regime has employed a variety of tactics around the world to stop Shen Yun from performing.

The Epoch Times obtained a document that shows a pattern of interference targeting the company. A "highly classified" document from China's State Administration of Radio, Film and Television dated Dec. 16, 2003, targeted the annual Chinese New Year Global Gala, a forerunner to Shen Yun.

The document said, "The leadership of the central government has ordered that they [the performance company] be destroyed by any and all means." If that was not possible, orders were to "minimize their impact."

Chinese officials have sent letters to politicians, performers, and venues, urging them not to attend, promote, or support the performances in any way.

Local Chinese embassies in numerous countries have threatened theatres to cancel contracts with Shen Yun. The Danish Royal Opera House cancelled their show in 2008; a show was cancelled then eventually rescheduled in South Korea in 2009; in Ukraine, the theatre didn’t buckle in 2009, but the government denied visas to the performers because the Chinese regime reportedly promised “unlimited financial aid” to the Ukrainian government if they did not allow the performers in.

In Canada and the U.S., the regime sent threatening letters through secret agents to overseas Chinese organizations saying that they would covertly take photos of anyone going to the show, which would cause them problems going back to China in the future. Performers' Families Threatened

The Epoch Times has reported that several Shen Yun performers have come forward to say their family members inside China have been harassed and threatened by Chinese authorities.

Liang Xu (a pseudonym used to protect the safety of his family) said that, several weeks ago, an elderly family member was detained in a hotel by Chinese security agents for a day, asking for Xu's phone number, and wanting to know if Xu would be going to Hong Kong and Macau to perform. The next morning, agents again threatened the family, pressuring them to write a guarantee that Xu would not go to Hong Kong, Macau, and Taiwan to perform.

Shen Yun performer Ms. Chen (also a pseudonym) said her elderly parents’ phone has been wiretapped for a long time and secret agents have come to the house to harass them. Agents have also given her parents phone cards and pressured them to call her and ask her to come back to Shanghai at the end of the tour. This month Chen reported that agents also started asking if she will perform in Hong Kong.

This season is first for Shen Yun to perform on Chinese soil, albeit on the island of Hong Kong. The Lyric Theatre of the Hong Kong Academy of Performing Arts will host seven shows, Jan. 27-31.