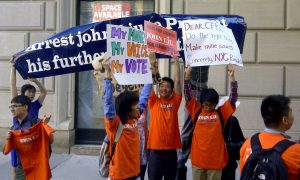 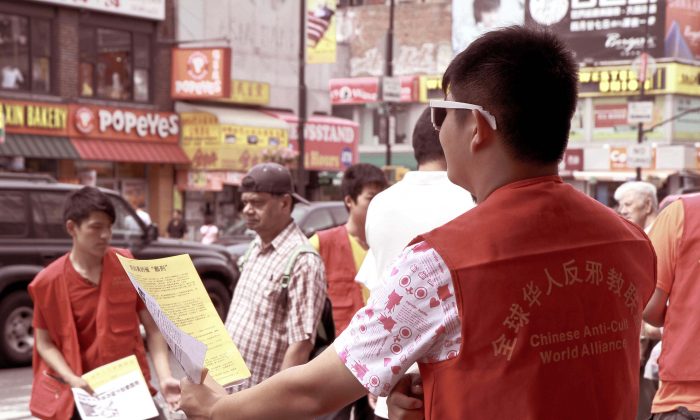 NEW YORK—Chinese high school students in New York are being recruited to staff a booth in Flushing that is being used as a base to spread the Chinese Communist Party’s (CCP) slurs and hate speech about Falun Gong, the spiritual practice whose adherents are tortured in China.

The same high school students are participating in efforts to get out the vote for city comptroller and mayoral candidate John Liu.

Falun Gong, also known as Falun Dafa, teaches meditative exercises and applying in daily life the principles of truthfulness, compassion, and tolerance. The CCP has targeted Falun Gong for elimination since 1999, according to the Falun Dafa Information Center, the official press office for Falun Gong.

Both inside China and in other countries, the CCP has lured millions of ordinary Chinese to support the persecution of Falun Gong. They support the persecution, often against their consciences, in exchange for the promise of personal benefits, such as a position at a good school, or a better job, or in response to intimidation and threats.

In Flushing, the propaganda booth staffed with the high school students is set up about a block from the Main Street subway station on the No. 7 line. The organizer is the Flushing-based Chinese Anti-Cult World Alliance. On Saturday, Aug. 10, a dozen 16- and 17-year-old students were on hand distributing CCP propaganda about Falun Gong in both Chinese and English languages.

Prisons and re-education-through-labor camps in China also use the propaganda in the forced brainwashing of practitioners, which frequently involves torture. The slander is also instrumental in attempting to justify the CCP’s persecution to the Chinese public.

Some of the students in Flushing who spoke to an Epoch Times reporter claimed they were in Flushing for school credits, and that the work is part of their high school curriculum’s community service credit.

“It helps us get into college if we do volunteer work,” said Lu Lu, of John Bowne High School in Flushing.

The 16-year-old Lu Lu was enrolling voters at a John Liu booth on Saturday, Aug. 10. A couple of weeks earlier, she had been outside the Flushing Library wearing the group’s signature red vests distributing materials that defame the Falun Gong spiritual group.

The girls said they had learned about the work through word of mouth. One girl learned from a friend, and the other after seeing the group outside the library.

The City Department of Education did not respond to a request for information on its oversight of community service credits as part of its high school curriculum.

Zhao Liang, who was coordinating the students on Saturday, is also a member of the Flushing Neighborhood Watch.

Members of organizations affiliated with the Chinese Anti-Cult Alliance have been involved in attacks against Falun Gong practitioners in Hong Kong, Taiwan, San Francisco, and New York City.

On a Saturday afternoon, Aug. 6, Jason Xiong, a 41-year-old Falun Gong practitioner from Shanghai, China, saw a group, including Michael Chu and the teenagers, gathered outside the Flushing Public Library. They were wearing red vests, yelling hateful words about Falun Gong, and insults about the teacher of Falun Gong.

“I felt very upset,” Xiong said. “They do this all over the world.”

Li Honghua, who registered the Anti-Cult World Alliance as a nonprofit in September 2008, was a major protagonist during an eight-week-long attack on Falun Gong practitioners in the streets of Flushing in 2008, while John Liu was a city council member for the district. She was convicted of assault with intent to cause injury in January this year for assaulting a Falun Gong practitioner in Flushing in August 2011.

John Liu supported the development of the anti-Falun Gong propaganda booth as far back as 2009, according to earlier reporting by Epoch Times.
l

During the discussion, Shen told the reporter that they had to make sure they were “not violating the law” when they started the anti-Falun Gong booth and that they “can’t just openly argue, mess with, and struggle against them [Falun Gong].”

John Liu’s supporters are still at it. During an Aug. 5, 2013, rally for John Liu in front of the Campaign Finance Board office, one of his supporters, mayoral candidate Randy Credico, shouted slogans against Falun Gong.

“He’s my friend. I’ve been defending him at every debate I’ve been at,” Credico told Epoch Times, referring to John Liu.

Credico said “other people in [John Liu’s] campaign” are the ones who told him about Falun Gong, noting that John Liu is “not gonna say it directly.”

When contacted by the Epoch Times, John Liu’s office declined to comment.