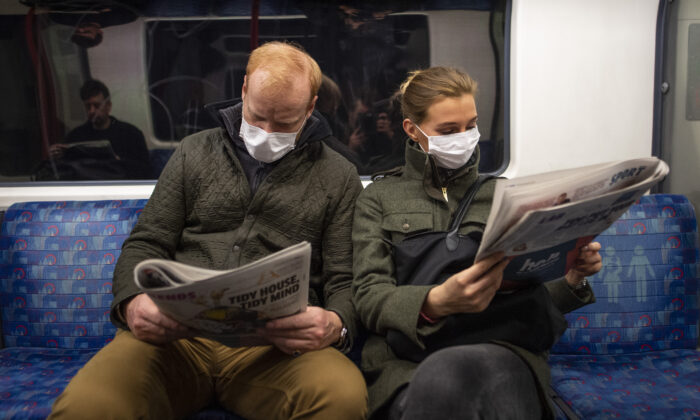 The media landscape of Britain has been completely transformed by the wholesale import of USA-style identity politics and social justice rhetoric, according to a new report.

Data released in a new report on Aug. 2 by the British academic and pollster Matt Goodwin has revealed that “social justice” terms associated with critical theorists have exploded in UK media.

Goodwin, who is known for his work on British and European politics, and visual analytics expert David Rozado looked at data on 16 million articles in a nationally representative sample of the 10 most popular media outlets in Britain.

They found that references to prejudice and social justice rhetoric had increased sharply in recent years, even though British media was “once known for being much less moralistic and divisive.”

A few years ago, Rozado studied data from 27 million articles in 47 media outlets in the United States and discovered that the number of words to describe prejudice, discrimination, and social justice—or “woke” ideology—had exploded. This became known as “The Great Awokening.”

In the study, Goodwin explained that “The Great Awokening” was “part of a rapid and dramatic change in the beliefs of mainly white, university-educated liberals on race, sex, and gender.”

“Many of the people who work in media, politics, the universities, the institutions, and who regularly consume content produced by the likes of The New York Times or The Washington Post, have simply become far more liberal than everybody else,” he added.

Now the UK risks rapidly following the U.S. “intensifying ‘culture wars” and is becoming more polarised over issues such as racism, identity, diversity, and the legacy of history, with social justice-style politics becoming more prominent.

British media are overwhelmingly embracing the same language and vocabulary as their American counterparts.

Goodwin and Rozado looked at the prominence of words that are associated with prejudice and discrimination in The Guardian, The Independent, The Daily Mirror, the BBC, The Times of London, Financial Times, Metro, The Telegraph, Daily Mail, and The Sun.

Between 2010 and 2020, terms such as “racism” and “white supremacy” in popular UK media outlets increased on average by 769 percent and 2,827 percent, respectively, while terms such as “sexism,” “patriarchy,” and “misogyny” increased by 169 percent, 336 percent, and 237 percent each. They found that “transphobia” had increased by 2,578 percent.

Mentions of prejudice have also become far more prominent in the BBC, the UK’s leading public service outlet, though sharp increases are pervasive across media, “regardless of their ideological leanings.”

A Shift ‘Toward More Concern’

Leading researcher into cancel culture in the world of academia Professor Eric Kaufmann told The Epoch Times by email that the report shows that UK media has “largely tracked the U.S. in its social justice terminology levels.”

Kaufmann is a professor of politics at Birkbeck College, University of London, and author of “Whiteshift: Populism, Immigration, and the Future of White Majorities.” He also has been a pioneer in using surveys to research “authoritarianism and political discrimination” in universities in both the United States and the UK.

“This would suggest that attitudes among the public, if affected by the media, are likely to shift toward more concern with these issues in the UK,” said Kaufmann.

Reflecting on the report, Marc Glendening, head of cultural affairs at the Institute of Economic Affairs think tank, told The Epoch Times by email that “identity politics has become the dominant prism through which politics and cultural life is now viewed.”

Glendening said this is a result of two factors.

“First, the way in which the left abandoned class struggle and the objective of a socialist transformation of the economy. From the 1930s onwards, commencing with the Frankfurt School and its ‘critical theory,’ the focus came to be on alleged cultural forms of oppression between groups including men and women and so on.

“Second, the failure of the centre-right to articulate a competing way of understanding society as a collection of individuals deserving of the equal right to be free to pursue their own personally chosen objectives and lifestyles,” said Glendening.

The study also mulled the reasons why this is happening. For example, there are financial incentives for media organizations to maximize diffusion of news articles through social media channels by “triggering negative sentiment/emotions, and/or political out-group animosity.”

But the study also pointed to U.S.-based journalist Batya Ungar-Sargon, who wrote the book “Bad News” and has spoken out on the effects of how journalism, once a working-class trade, is now dominated by the highly-educated children of high socioeconomic status families who often hold more left-leaning views.

Ungar-Sargon, who is also the deputy opinion editor of Newsweek, told The Epoch Times last year that in the United States, the mainstream media has abandoned the American working class and “catered only to the liberal, highly educated elite.”

“The last five, ten years has been really the abandonment of the working class by journalists on the left,” Ungar-Sargon told EpochTV’s “CrossRoads” program.

“But what happened was the mainstream media, liberal mainstream media, has really abandoned that fight in favour of one around issues of identity, wokeness, issues like critical race theory and intersectionality that are really, really alien to the concerns of working-class Americans of all races,” she added.

The study indicates that the UK media landscape is following a similar trajectory to the one Ungar-Sargon warned about, with British journalists also far more likely to come from upper middle class or higher socioeconomic status households.

Glendening said that political liberals, whether from traditional old-left or conservative backgrounds “need now to come together to form a coalition for cultural freedom against the authoritarian politics and worldview of the New Left.”

“Real liberals need to go head-to-head with those who seek to curtail our freedom of speech and other basic personal liberties which are essential for the survival of a pluralistic democracy. This requires restating the fundamental principles of a Western, rationally based society, the values of the Enlightenment,” he added, saying that “society is not made up of ‘privileged oppressors'” and ‘marginalised’ categories but of individual people.”

“The exercise of power needs to be understood in terms of the empirically verifiable acts of specific persons against other individuals, not in terms of vague and unverifiable social forces,” he said.

Glendening added that Goodwin is “arguably quite wrong to associate the development and advance of ‘woke’ politics to ‘liberals.'”

He said that this type of “New Left politics” has its origins in a “profoundly anti-liberal understanding of the world, one which sees, as with classical Marxism and fascism, human existence as a group-based struggle for power.”

“The New Left sees all human interaction as a quest for power and therefore inherently political by nature.

“The liberal perspective, on the other hand, sees politics in a much more limited way and characterises most human relations in terms of peaceful and spontaneous, non-directed, interactions,” said Glendening. He previously used to work for Policy Exchange focusing on freedom of speech-related issues and the political implications of human rights law.

He said that the role of government is “essentially to safeguard this spontaneous, non-political, order.”

“The premise is completely different from that of totalitarianism. Woke politics are an embryonic form of authoritarianism, albeit one that does not articulate itself in the clear way fascism and Marxism once did,” he added.