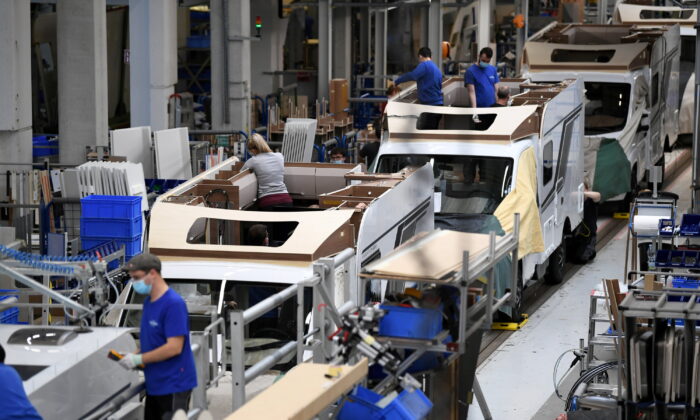 Europe’s factories have begun succumbing to dangerously escalating energy bills following retaliatory Russian cutbacks, resulting in an inflation rate of more than 9 percent and a dip in industrial production, which is expected to worsen in coming days.

Industrial production for July 2022 decreased by 2.3 percent in the eurozone—i.e., the 19 countries that use the euro—and by 1.6 percent in the European Union (EU), compared to June 2022, according to Eurostat. When compared with July 2021, it was down by 2.4 percent and 0.8 percent. This was the biggest fall in production for more than two years.

Because of primarily high energy prices, factory output in the 19 eurozone countries is declining, with the biggest numbers coming from Ireland (with a monthly reduction of 18.9 percent), Estonia (7.4 percent), and Austria (3.2 percent), and a yearly decrease of 23.7 percent for Ireland, 6.4 percent for Estonia and Slovakia, and 5.1 percent for Belgium. Germany suffered a 0.7 percent monthly downturn.

More downturns are expected in the coming months which will affect manufacturing and consumer spending. “Further contractions in industry are on the horizon,” Rory Fennessy, an economist at Oxford Economics, said to the Financial Times, adding that companies would be “forced to cut back production even if hard rationing is to be avoided.”

Ireland’s drop weighed on the entire region. If the country had been excluded from the data, the decline would have been about 0.6 percent. “There’s a trend here: Irish data are becoming so volatile, it’s increasingly affecting eurozone aggregate numbers,” Conall Mac Coille, chief economist at stockbrokers Davy in Dublin, Ireland, said to FT. “We’re seeing moves of this order all the time, and they seem to be getting worse.”

Many economists are predicting a contraction in European economies during the coming months, with the degree of severity depending on procuring natural gas from non-Russian sources and the amount of help given to local businesses and households by the government.

“The darkest cloud on the horizon is clearly in the eurozone,” said Marcelo Carvalho, global head of economics at BNP Paribas, according to The Wall Street Journal.

Energy-intensive metal industries are one sector that is bearing the brunt of high energy prices.

“Fifty percent of the European Union’s aluminum and zinc capacity has already been forced offline due to the power crisis, as well as significant curtailments in silicon and ferroalloys production and further impacts felt across copper and nickel sectors,” said the European Association of Metals, Eurometaux, in a letter (pdf) to the European Commission, the European Parliament, and the European Council.

“In the last month, several companies have had to announce indefinite closures, and many more are on the brink ahead of a life-or-death winter for many operations. Producers face electricity and gas costs over 10 times higher than last year, far exceeding the sales price for their products.”

Once shut down, these industries face significant costs to start up again. They blamed the critical situation on “insecure gas supplies, a continued nuclear and coal-phase out,” and dependence on power sources that are insufficient to cover market needs. “More closures will follow next year once companies are not protected by their 2022 hedging of the electricity price.”

“History has proven that once aluminum smelters go away, they don’t come back,” said Mark Hansen, chief executive of metals trading house Concord Resources Ltd, to Bloomberg. “There is an argument which extends beyond employment: this is an important base metal commodity—it goes into aircraft, weapons, transport, and machinery.”

The benchmark Natural Gas EU Dutch TTF prices spiked from €201.864 per megawatt (MWh), on Aug. 1, to €346.522 on Aug. 26—an increase of more than 71 percent following months of energy squeeze by Russia. When the Russian oil company Gazprom shut down the Nord Stream 1 pipeline indefinitely at the beginning of this month, energy prices shot up 30 percent.

Prices have since eased, and are hovering at €182.262/MWh, as of Sept. 19, as countries in Europe released credit lines for gas purchases to ensure steady supply during winter. Nevertheless, gas prices remain more than 450 percent higher than they were on Sept. 21, 2021.

Energy companies in the region had to put up collateral of more than $1.5 trillion, according to Bloomberg estimates, in order to continue trading on natural gas markets. The disruption has affected the ability of many utility companies to purchase adequate amounts of gas.

Utility companies hedge price fluctuations by betting on the market. If they win, they can use the gains to offset immediate price increases for consumers.