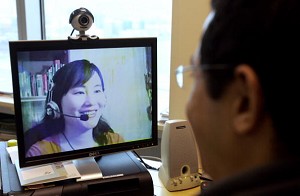 Dynamic Internet Technologies (DIT), a North America-based company known for its products that override Internet censorship, recently discovered that the Internet phone service company Skype is cooperating with Internet censorship in China. On Monday DIT announced that it has tested and confirmed that Skype.com redirects visits from Chinese IP addresses to the homepage of Tom-Skype that has Trojan horse capabilities.

Last year, Business Week magazine and Radio Free Asia reported that Tom-Skype—a simplified Chinese version of the service developed in collaboration with China's Tom.com—filters traffic for sensitive phrases such as Dalai Lama and Falun Gong. Human Rights Watch has since requested that Skype publish all of its Trojan capabilities and filtering keywords.

Not long ago, DIT urged Skype users in China to download the software directly from Skype's U.S.-website and avoid the Tom-Skype version, but with Skype's recent collusion with China's Internet censorship campaign, this method is no longer a safe option. DIT's latest recommendation is for Chinese users to use a direct link: http://www.skype.com/intl/zh-Hans/helloagain.html .

Still others have found different ways to avoid Tom-Skype. On Tuesday, Zhang Qi of the Pan-Blue Alliance—a mainland Chinese network group—said that his circle of friends have been downloading Taiwan's version of the Skype software to avoid the problem's associated with Tom-Skype.

Skype has become a popular communication tool among democracy activists in mainland China in recent years. Due to its excellent vocal clarity, fewer imposed restrictions, and an end-to-end encryption feature making it difficult to monitor, many Chinese democracy activists have favored Skype over traditional telephones and other similar communication tools. Earlier this year, the China Human Rights Forum, hosted a June 4th Tiananmen Massacre Memorial using Skype, and over 70 people participated in the event.

While Skype enjoys millions of users worldwide, restrictions to the service will undoubtedly make it much less appealing to those in China. One Chinese Internet user, who was not willing to reveal his identity, mentioned that the promotion of Skype to China's general public has not been very successful. “Because of the communication regulations in the country, Skype users can not use it to call landlines, so it has lost its competitive advantage in this market,” he observed.