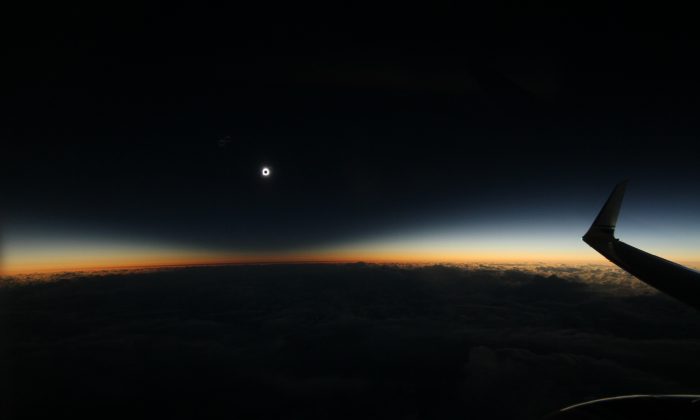 The full shadow of the moon during the total solar eclipse on March 8, 2016, as seen from an airplane over the North Pacific Ocean. So-called eclipse chasers boarded a special flight from Anchorage to Honolulu to view the eclipse on Tuesday from the air. (Dan McGlaun/eclipse2017.org via AP)
Science

ANCHORAGE, Alaska—Skygazers from around the U.S. caught a flight from Alaska to Hawaii for prime viewing of a total solar eclipse that unfolded over parts of Indonesia and the Indian and Pacific oceans.

A dozen eclipse enthusiasts were among the 181 passengers on the plane Tuesday that departed Anchorage for Honolulu. The rare event occurs when the moon is close enough to Earth to completely block out the sun.

Joe Rao, an associate astronomer at the American Museum of Natural History’s Hayden Planetarium in New York, called Alaska Airlines last fall, explaining that the flight would be in the right place for the eclipse. The route was expected to encounter the darkest shadow of the moon as it passed over Earth.

Problem was, the plane would be passing by nearly a half-hour too soon.

The airline rescheduled the flight to depart 25 minutes later, and it rendezvoused with the eclipse’s sweet spot nearly 700 miles north of Honolulu. After the schedule tweak, Rao and a dozen other astronomy aficionados booked seats for the big show at 36,000 feet.

Rao, like other self-dubbed “eclipse geeks,” was thrilled about setting out to witness his 11th such spectacle.

“It is an experience,” he said of watching the sun turn into a giant black disk in the sky. “Every fiber of you gets involved in those few moments when the sun is totally eclipsed.”

The eclipse was expected to last just under two minutes in that location. The last total solar eclipse was in March 2015, and the one before that was in 2012.

Craig Small, a semiretired Hayden Planetarium astronomer, was viewing his 31st total eclipse. To mark each viewing, he carried a special eclipse flag made in 1972.

Also on board was Dan McGlaun, who brought 200 pairs of special filter glasses to distribute to other passengers. McGlaun, a project manager who runs eclipse2017.org, was excited about viewing his 12th total eclipse.

“It’s going to be amazing. It always is,” he said before boarding. “It’s a universal reaction when you see an eclipse. You cheer, you scream, you cry.”