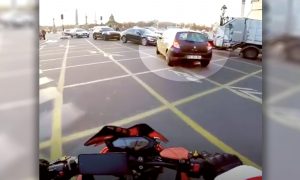 An amazing video has recently surfaced on line of the moment one daredevil parachutist decided to jump from a plane at twenty five thousand feet with nothing but a sky diving suit on. That’s right a sky diving suit and no parachute!!!

The daredevil stunt was performed by Luke Aikins at Big Sky Ranch in Simi Valley California and was part of a series of stunts put on by Mondelez International’s Stride Gum Brand.

In the video we see Luke free falling through the air, the ground a distant blur below him as he and two other daring people make star shapes in the sky. Luke’s two companions for the jump, unlike him, are clearly wearing parachutes and appear to have cameras strapped to their helmets to capture the jump for posterity.

We then see a clip of Luke’s target, a one hundred by one hundred foot “deceleration net” that is dangling between four large cranes on the desert floor below.

We watch as Luke’s companions pull their own chute sand disappear into the ether before Luke hits the deceleration net with force, causing it to sink dangerously towards the ground below.

The video then switches to the ground where a group of worried bystanders run over to see if Luke has survived the fall intact only to be relieved as Luke jumps from the net unscathed and proceeds to give out high fives to all those assembled.

The video then inexplicably goes on to show a series of other daredevils performing various feats in the sky, from amazing synchronized displays to an old man sky diving for the first time.