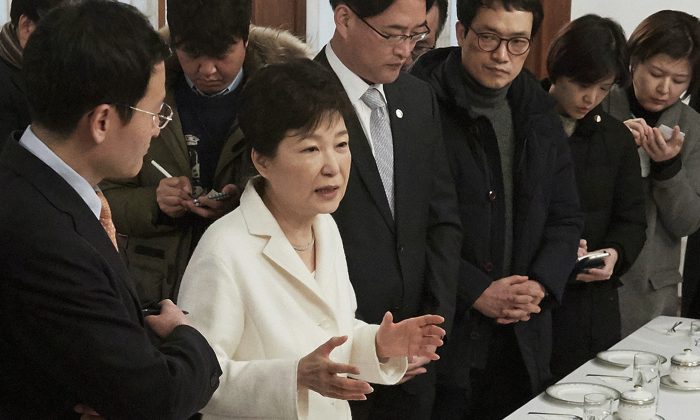 SEOUL, South Korea—South Korean President Park Geun-hye refused to testify Tuesday in the impeachment trial that will decide her future, prompting the prosecutors to question why she has publicly denied the charges of corruption but will not do so before the court.

After Park’s refusal, the Constitutional Court delayed the start of oral arguments and asked her to testify on Thursday, when some of her current and former aides are also scheduled to testify. The court cannot force her to appear but can proceed without her if she refuses twice to appear at the hearings.

Lawmaker Kweon Seong Dong, the chief prosecutor in the trial, questioned why Park (pronounced Bahk) cannot defend herself in court when just two days ago she vehemently rejected the accusations of corruption in a hastily arranged meeting with reporters at Seoul’s presidential Blue House.

“It’s not good etiquette to the justices and also inappropriate for the president, as the defendant of the impeachment trial, to say this and that to the media outside of court,” Kweon told reporters.

Lee Joong-hwan, Park’s lawyer, said she does not plan to appear Thursday and will probably not testify during the impeachment trial.

The trial in the Constitutional Court must decide within six months of her Dec. 9 impeachment whether Park should permanently step down or should be reinstated to office. If the court formally removes Park from office, a presidential election will be held within 60 days.

Park has been accused of colluding with confidante Choi (pronounced Chwey) Soon-sil to extort money and favors from companies and allowing the friend to manipulate government affairs. Choi, Choi’s niece, and several former government and presidential officials have been indicted, and a special prosecution team has been investigating bribery suspicions between Park and business giant Samsung.

The investigators want to bring home Choi’s daughter, Yoora Chung, who was arrested in Denmark on an international warrant, as they look into the suspicions that Samsung sponsored Choi in exchange for government favors.

Cho June-hyuck, Seoul’s Foreign Ministry spokesman, said that the ministry is preparing for the extradition of Chung, and that her passport will be invalidated if she doesn’t hand it in by next Monday.

Speaking to Korean reporters in Denmark, Chung said she’s willing to return to South Korea if she could continue to be with her 19-month-old-son. She also said Samsung took back a horse and car it had provided her.

Her Danish lawyer, Jan Schneider, said Chung denied any wrongdoing and that an appeal of her four-week detention had been filed.

Prosecutor Mohammad Ahsan told The Associated Press that Denmark had not received yet a formal request from South Korea, adding it “will be treated with thoroughness like any other similar case,” adding “any extradition will be assessed on what Danish law says.”

“A decision would be made a few weeks after we have received a formal South Korean request,” Ashan said. “After that a decision will be sent to a court of law and can be appealed.”

The country’s former health minister was arrested on allegations he forced the National Pension Service to support a merger between two Samsung affiliates last year. The deal shaved the fund’s stake in one of the companies by an estimated hundreds of millions of dollars, but allowed Samsung scion Lee Jae-yong to promote a father-to-son succession of leadership and boost corporate wealth at the group.

Lee has apologized for the use of corporate funds to buy a horse for Chung, an equestrian athlete, but denied that Samsung sought favors from Choi or Park’s administration. There are also questions as to why Samsung financially supported a winter sports center run by Choi’s niece and a sports management firm Choi established in Germany.