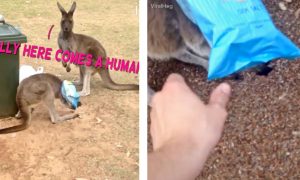 Kangaroo With Head Stuck in Chip Bag Jumps Around Helplessly, but Watch What Man Does
0
Share Now
TelegramFacebookTweetEmailTellMeWeReddit
Copy Link 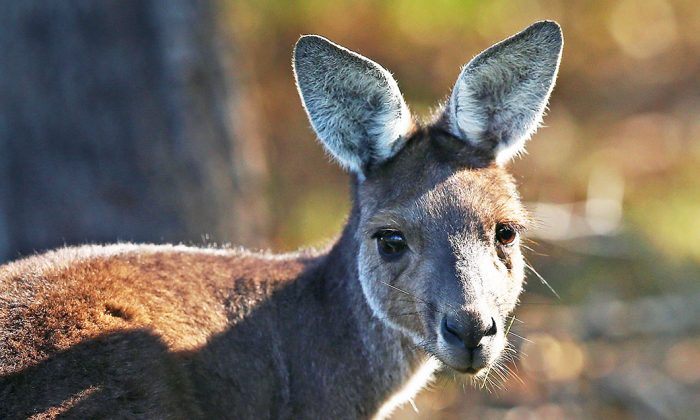 Shooting of kangaroos has sparked fears of eradication of the species. (Paul Kane/Getty Images)
Australia

A smartphone video of a kangaroo hopping through Australia’s snowy wilderness became an internet sensation on Aug. 10.

Australian National University Chief of Staff Christopher Price recorded a kangaroo hopping through mounds of snow proving to the world there are parts of the land ‘Downunder’ where it actually snows.

“How to prove it snows in Australia,” Price said on Twitter.

How to prove it snows in Australia pic.twitter.com/hu9sZzFTxw

The six-second video shows the kangaroo quickly hopping through what appears to be a clearing in the bush filled with eucalyptus trees and other native Australian vegetation.

“A kangaroo,” Price can be heard saying on the video.

If there’s one image that would convince any of the doubters it has in fact been snowing in Australia this weekend, this would be it. https://t.co/yDSmtng4VI

Many Twitter users reacted to the post, questioning the authenticity of the footage even though the kangaroo and vegetation appear to be native to Australia. Some explained their concerns since the video could show a kangaroo zoo somewhere in North America, Western Europe, and other parts of the world.

This skepticism prompted other Twitter users to post their videos of kangaroos, wombats, kookaburras, and other iconic Australian wildlife.

How about these wombats in the Tasmanian snow? pic.twitter.com/LDlOWYwUsr

“There’s been a good layer of snow around,” BOM Senior Forecaster Dean Steward told the Australian Associated Press (AAP). “There have been snowfalls at fairly low levels, which is a little more unusual.”

Areas as low as 400 meters were reported to have snowfall overnight and into the following morning. There was no record of the height of snow since BOM does not record snow depth according to AAP.

Wintery blast continues for SE Australia. #Snow showers lowering to 400m for #Victoria Sunday morning, down to 600m for #Tasmania and the southern & central ranges of #NSW. Might even see sleet or snow for the #GraniteBelt tomorrow night. https://t.co/K7FNsXbmsT pic.twitter.com/lbRasjME1F

The snow caused road closures on Mount Baw Baw Tourist Road and South Face Road as well as weather warnings for most parts of Victoria.

“Heavy snowfalls and freezing temperatures have resulted in road closures and treacherous driving conditions in our Alpine areas,” a VicRoads spokesperson said in a statement obtained by AAP. “With little wind, snow-laden trees are falling, blocking access.”

Popular alpine resort Mount Baw Baw was shut off, and VicRoads spotted sections of the Calder Freeway and Macedon-Woodend Road that had hazardous black ice.

“If you’re heading to mountainous areas, please drive with extreme care as you may encounter snow or black ice,” a VicRoads spokesperson said.