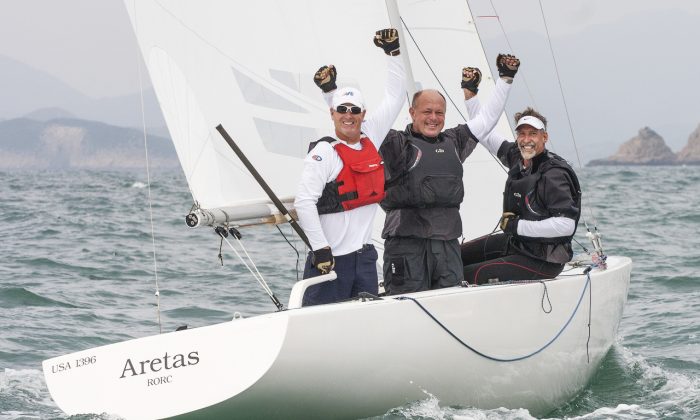 HONG KONG—The Etchells World Championships 2015 took place over 9-races off Clearwater Bay to the East of Hong Kong Island, from Nov 1-7. A total of 43 boats took part with competitors from all over the world: 4-boats from USA, 14 from Australia, 5 from the UK, 2 from UAE, 1 each from New Zealand, Ireland, Switzerland, and Bermuda, and 14 from Hong Kong.

The weather on most days was testing with winds of up to 20knots and with up to 3-metre seas and many of the competitors commented on the super sailing conditions here in Hong Kong.

Competition was fierce with overseas professionals dominating the competition although Hong Kong sailor Mark Thornburrow who finished 12th overall scored a win in Race-1 and Frank van Kempen and team produced 2nd and 3rd place finishes in races 4 and 8 respectively, to complete the event in 11th place. Jamie McWilliam and Laurence Mead of Hong Kong were also well placed at positions 16 and 17 respectively.

The 3-man team of Skip Dieball of USA took Championship honours with 2-wins, 2nd, 3rd 4th, 2-5th places and a 6th place finishing with 27 points nett – they had one bad result; a 13th place finish which was discarded.

Steve Benjamin and team also of USA came second just 2-points further back on 29-points. Graeme Taylor of Australia and Great Britain’s Jeremy Thorp were the next in line, both finishing on 50 points but Taylor secured 3rd on countback.