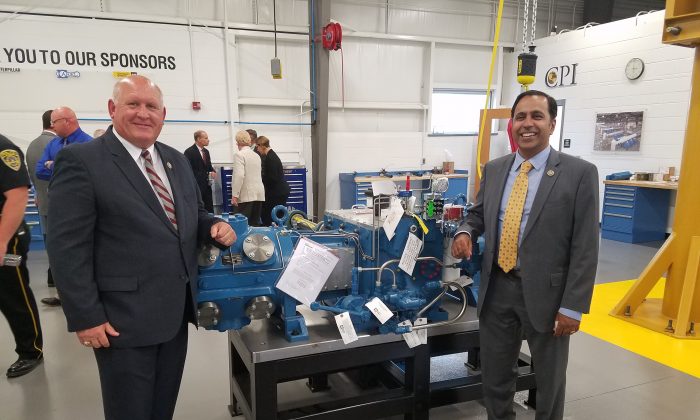 WASHINGTON—Optimism within the nation’s business world has reached its highest levels in years, yet this optimism is challenged by a growing shortage of skilled workers—an issue that cuts across many industries.

As the U.S. economy continues to expand, investment in workforce education and training have never been more important to sustain growth, according to the National Skills Coalition. Nearly 80 percent of jobs require some form of education or training beyond high school.

“There is a tremendous return on investment when we invest in any type of workforce development,” Rep. Glenn Thompson (R-Pa.) told The Epoch Times.

“I’ve always been one to advocate for more money invested” in workforce education programs as they “can take people off of government dependency,” he added.

Thompson believes that the skills gap problem is one of the greatest threats to the nation’s economy.

“Given future retirements, given the current state of seven million jobs that are open or available, not having a qualified and trained workforce is a tremendous risk,” he said.

Following years of delay, the bill passed both the House and Senate unanimously in July last year and was signed into law by President Donald Trump. It reforms the career, technical, and vocational education system in the United States for the first time since 2006.

The bill is a significant step in fixing the skills problem, but Washington needs to do more, according to Krishnamoorthi.

Krishnamoorthi also stressed the importance of apprenticeship programs and praised companies such as Zurich North America Insurance that develop skills pipelines to support economic growth. In his congressional district, he said, the insurance company partnered with a local community college to offer an apprenticeship program that trains hundreds of students.

Many Americans lack the talent or credentials they need to compete for existing jobs. As of the end of November, there were 6.9 million unfilled jobs. Meanwhile, 6.5 million unemployed Americans are looking for jobs, and the labor force participation rate lingers at 63 percent.

Historic labor-market tightness, combined with years of underinvestment in technical skills training, has made it very difficult for companies to fill job openings.

Small business owners, for example, continue to hire at record high levels, but 88 percent struggle with finding qualified employees, according to a recent report by the National Federation of Independent Business.

Another report, by Deloitte Consulting and the Manufacturing Institute, found that about 2 million positions in the manufacturing sector would go unfilled in the next 10 years because of the skills gap.

Trump signed an executive order in July to create the National Council for the American Worker, which is responsible for developing strategies to address this growing skills problem. The council, made up of top government officials, works with the private sector and local governments to expand vocational education, technical, and on-the-job training for students and mid-to-late career workers.

More than 100 U.S. companies and organizations said they would support the workforce initiative, by pledging to train over 6 million workers and students to help them gain new skills.

In the State of the Union speech on Feb. 5, Trump didn’t mention the workforce development initiatives, although he did tout the record unemployment numbers.

“I thought that was a missed opportunity,” Krishnamoorthi said. “This was one of the biggest achievements of the last two years—completely bipartisan, bicameral. I think he would have earned a big standing ovation.”

There is tremendous bipartisan support on this issue, as “everybody knows that skills-based education is the future of our country,” he said.

Growth in the labor force is one of two key factors in high and sustainable economic growth. For more than five decades, a growing labor force provided a sizable boost to economic expansion, thanks to the emergence of the baby boom generation and the entry of women into the workforce.

Since the turn of the century, however, workforce participation has steadily declined from just above 67 percent to a low of below 63 percent. The recent decline has been concerning to many economists and policymakers who recognize the strong link between labor force participation and economic growth.