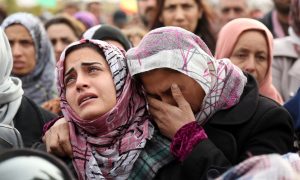 Could an End to Syria's Civil War Be in Sight?
0
Share Now
FacebookTweetParlerEmail
Copy Link 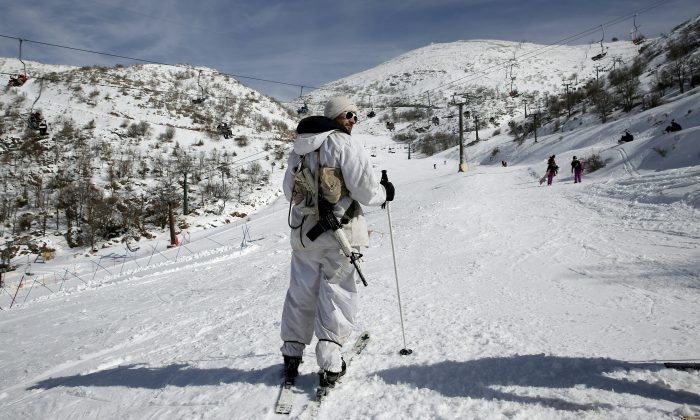 An Israeli soldier of the alpine unit observes skiers on a slope at the Israeli Mount Hermon ski resort, in the Israeli-occupied Golan Heights, on Jan. 21, 2016. For Israelis, the Hermon range, straddling Lebanon and the Syrian and Israeli-held sectors of the Golan, is a highly strategic area under close surveillance. (THOMAS COEX/AFP/Getty Images)
Middle East

Skiing on the Edge of Syria’s War

The snowy ridge of Mount Hermon separates two worlds. In one, Syria’s war rages. In the other, Israeli tourists slalom down ski slopes or drink mulled wine to the sound of techno music.

On a clear day Damascus is visible from the top of the ski lift 2,200 metres above sea level in the Israeli-occupied Golan Heights where tourists reapply their sunscreen.

The Syrian capital is only 25 miles away but there is no access to it as Israel and Syria are still officially at war.

Israel seized most of the Golan Heights from Syria in the 1967 Six-Day War and later annexed the territory in a move never recognised by the international community.

For Israelis, the Hermon range, straddling Lebanon and the Syrian and Israeli-held sectors of the Golan, is a highly strategic area under close surveillance.

But every year when the snowflakes fall, Mount Hermon becomes a ski resort unlike perhaps any other in the world.

Skiers thinking of venturing off-piste are discouraged by the large signs warning of landmines, while in the distance antennas mark vast Israeli military bases. Soldiers are everywhere.

Chair lifts are close to military outposts where soldiers scan the horizon with binoculars.

“If Syrians want to infiltrate here then they should be very good skiers,” joked Nabir Abu Saleh, head of the ski patrol station, pointing to the steep slope forming a natural buffer adjacent to the Syrian side.

“And if it is summer, they would have to be motocross champions.”

The Israeli army is less fearful of infiltration than of stray shells fired by the Syrian military or rebels.

“We have already had to evacuate the site on several occasions. We’re very well organised,” Liron Mills, the director of the site, told AFP.

“We do not feel the war here. It is protected. There is the army, the police and we are in complete coordination with them,” said Mills, who is also a ski instructor with reservists for the Israeli army.

In his spare time, he introduces young conscripts deployed to the area to ski basics.

Despite their white camouflage dress, soldiers are easily identified on the slopes, rifles strapped around their necks as they carefully practice manoeuvres amid more skilled skiers.

Israel, more known for its southern desert, is not a country famed for its expertise in winter sports.

But the country’s only resort and its 14 slopes – which range from green to black – are able to accommodate up to 8,000 visitors a day.

Itay, 28, took a day off from Tel Aviv and made the three-hour journey to test the year’s first snow and feel “like I am on holiday abroad”.

“We have not stopped taking the bus because it could be blown up, or stopped surfing because there could be another war, like the French didn’t stop going to concerts because there were attacks,” he said, reflecting a widespread mindset among Israelis accustomed to violent conflict.

“There is not much snow in Israel. So coming here is an attraction. We just want to have fun,” said Amir Cohen, who brought his children sledging.

On the slopes a cross-section of society includes veiled Muslim women, ultra-Orthodox Jews, and UN soldiers on leave from monitoring duties nearby. The most dangerous projectiles traded here are usually snowballs.

“Anyway the bombings, you hear them far louder in the villages below than here,” said Fayad Abu Saleh, who is, like the majority of other employees at the site, from one of the neighbouring Druze villages.

Druze Arabs, who belong to an offshoot of Shiite Islam, are divided between Syria, Lebanon, and Israel.

“Our dream is that one day this region will be safer and at the turn of a piste you can end up in Syria, and then back to the station to get the Lebanon chairlift,” sighed Nabir Abu Saleh, the ski patrol chief.

“Every day when you go up here, we think of what is happening in Syria – children and refugees who sleep in tents in the cold. We come with our equipment, our suits, and you can still feel the cold. But them?

“Yet we cannot do much from here. We just want it to end as soon as possible.”