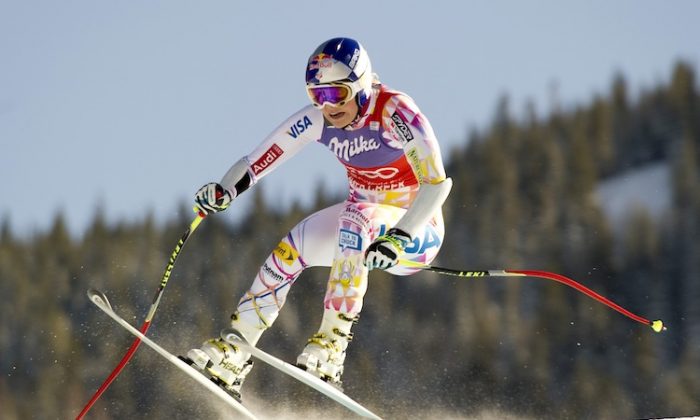 Lindsey Vonn catches air on the way to her fourth victory in a row on the World Cup circuit. (Don Emmert/AFP/Getty Images)
Entertainment News

Skier Lindsey Vonn responded to criticism over her controversial political statements she made last week.

Vonn received serious backlash for a CNN interview, saying that she wouldn’t represent Trump during the 2018 Olympics.

Two days later, over the weekend, the skier suffered a back injury at a World Cup event in Switzerland, taking her out of the race.

On Tuesday, she attempted to clarify her stance on Trump and the Olympics.

“As I head to France for the next races, I would like to share with you my reflections from the past few days,” Vonn, 33, wrote on Instagram. “I’ve received a tremendous amount of feedback, both positive and negative, about my recent CNN interview. The point that I was trying to articulate is that all Olympic athletes represent their nation as a whole, and are not representatives of their government or any specific political figure or party.”

After her CNN interview, she noted in the post that it “opened up my eyes as to how divided we are right now.”

“All of this is much bigger than skiing and the Olympics. I am going to take the next two months to focus on what I can do and right now that is competing for my country. In doing that, I will be hoping that we Americans can still be that ‘shining city on a hill,’” she continued. “We need to find a way to put aside our differences and find common ground in communicating. Is it wrong to hope for a better world?”

“You complain about how divided the nation is but you go and add to the division in this country by publicly turning your back on the POTUS,” one person wrote.

“What did you expect after your interview? Praise? Ironic you should mouth off and not even make it to the Olympics,” said another.

US skier Lindsey Vonn pulls out of race in St. Moritz after suffering back injury https://t.co/JTWftSVS93 pic.twitter.com/IZqUF4TA37

A number of people were critical of her Trump comments after she announced her injury on social media.

“I wish you no ill will, Lindsey. Truth is though, I lost interest in you as a competitor when you decided to forget the many of us who will be cheering the U.S. on and don’t appreciate your disrespect for our president,” wrote one person in a tweet.

After the injury, many tweeted the meme, “Donald Trump broke me,” at Vonn. Others suggested that she was a victim of the “Trump curse.”

“I don’t wish you any harm, but I do believe you reap what you sow. If you are participating in the Olympics—you are representing USA. @realDonaldTrump IS our POTUS, therefore you DO represent our POTUS. Leave your Political views at home. You don’t have another venue to hate?” wrote another user.

Alan Kildow told The Associated Press that Vonn is “OK” after the injury.

“I am extremely disappointed,” Vonn tweeted Sunday about her injury. “But my biggest goal this season is the Olympics and I need to take care of myself now so I can be ready for next week, and more importantly, for February.”

She added: “Looks like i have an acute facet (spinal joint) dysfunction. I got compressed on the 6th gate and my back seized up. Rested and had a lot of therapy tonight. We will see how I feel tomorrow and then decide if I will race. Thanks for the support.”

Think your friends may not know about this? Share this article to keep them up to date and support our media. Thank you!