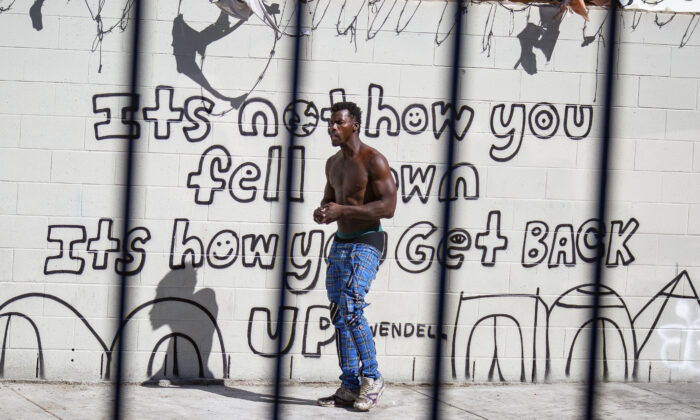 LOS ANGELES—As the morning sun created dramatic shadows against the skyscrapers of Los Angeles, a man stood in the middle of 7th street blocking traffic and looking in his pockets for something that wasn’t there.

He ignored the traffic, while cars gently moved around him and carried on with their commutes, until he slowly dragged his feet to an encampment-filled sidewalk. Simultaneously, a man began to urinate openly in public, as a mother quickly turned her head the other way while she pushed a stroller along the busy roadway, as the sidewalks were no longer useable, covered in tents and tarps.

The Skid Row area of Los Angeles, roughly 50 city blocks within the downtown epicenter, is typically marked by the perimeter of Alameda and Main streets to the east and west, and 3rd and 7th streets to the north and south. The homeless community concentrated within this area makes up more than a quarter of Los Angeles County’s approximately 66,000 unsheltered individuals.

The area’s troubled history dates back to the late 1800s as the last western stop for the United States transcontinental railroad, where a constant population of transients and job-seekers were greeted with cheap hotels, bars, and brothels.

A century later, in 1975, Los Angeles city officials developed a plan to concentrate homeless outreach groups and resources within the Skid Row area, hoping to assist the large number of homeless individuals in obtaining resources in one set location. As a result, activists say the homeless population itself became more and more concentrated within the area.

Crime has long been a problem on Skid Row, as well as the availability of drugs that have kept so many sleeping on its streets. In 2021, the Los Angeles County Department of Public Health reported (pdf) that drug and alcohol overdoses continue to be the leading cause of death for these homeless individuals.

“While transportation-related injury, homicide, suicide and liver disease mortality rates decreased slightly in 2019, the rate of overdose deaths increased by about 13% compared to 2018, and by 84% compared to 2016,” the report stated.

“Every drug except fentanyl had a decrease in the percentage of deaths … Because fentanyl is cheaper and more addictive than other drugs, drug sellers often blend it with other drugs to increase profits.”

Crystal meth, often mixed with fentanyl, can be purchased for only $2.00 per hit on Skid Row. A large portion of the homeless population has become addicted to the substance, which leads to harsh physical symptoms and mental characteristics similar to schizophrenia.

“I would say the majority of the population is struggling with drug addiction, with alcohol addiction, and dealing with mental health, and I would say that another small portion of the population are people down here are taking advantage of those who are addicted—the drug dealers,” Antwone Sanford, outreach manager for the Los Angeles Rescue Mission, told The Epoch Times in June.

“We can’t identify them, but we know it is happening. It’s very dangerous living in Skid Row. You have people in a very hurt state, and you have people taking advantage of them.”

Locals say the state of Skid Row’s sidewalk encampments has gone from bad to worse, with more tents, drug availability, and instability.

“When you come down and you want to help a homeless person, you want to give them a tent to help … but it really doesn’t help, because what it does is put them in a comfortable setting with their addiction, to use drugs, and to also be taken advantage of,” Sanford said.

“I think we really need to revisit encampments, because when a person uses drugs, they go into a state of euphoria in their mind, and they stay locked in their encampments.”

On 6th Street, a man walking in front of a shop suddenly dropped to his knees and started violently screaming into the air, the veins on his forehead becoming visible. After seeing his reflection in a vacant storefront window, he appeared to snap out of his distress and continued slowly walking to an unknown destination.

From his location, a short walk toward the 110 Freeway leads to the Financial District—several blocks of luxury hotels, fancy restaurants, and apartments that can cost as high as $28,560 per month in rent.

In 2021, Los Angeles Mayor Eric Garcetti announced the allocation of $1 billion to combat the city’s homeless crisis—one year after the launch of Project Roomkey, a state-funded program that was to equip 15,000 unused hotel rooms to house the city’s homeless population. A year after its launch, only about 1,690 rooms had been used by the county’s unsheltered community.

“By the looks of it, Skid Row is not getting better but getting worse, with an even greater influx of homeless people on drugs in the area, where it’s common to see people shooting up with needles on the sidewalk in broad daylight, while cars, including police, just drive on by,” said Ryan, a Christian ministry worker from Los Angeles who visits Skid Row on Wednesday nights to encourage the homeless community.

“I believe over time it can become safer, but right now it’s like the Wild West, and a free-for-all.”

Other ministry workers share similar constraints as they try to bring hope to the lost in Los Angeles’s most dangerous neighborhood.

The Union Rescue Mission has been serving the homeless community since 1891. Rev. Andrew J. Bales, CEO of the Mission since 2005, said that over the past year, the area has experienced an increase in violence.

“[There’s] a continued failed policy by LA County and LA City of corralling and containment of homeless people on Skid Row, centralized services, and a failure to follow Federal Judge David Carter’s ruling to immediately house and shelter all who are on the streets of Skid Row.”

Despite these challenges, Bales and his team continue to provide their services to the homeless community and aim to decentralize Skid Row by creating satellite outreaches throughout Los Angeles County.

“A continuation of making it a dumping ground of our most vulnerable people [is] not just,” Bales told The Epoch Times.

Near sidewalk tents off of 6th street, a man in his mid-20s with orange-dyed hair quickly ignited a conversation.

Austin, from Boston, told The Epoch Times he had been living on the streets of Los Angeles for the past three months.

“I’m trying to get a movie production going,” he said, as he fumbled with the bags he was carrying.

“But it’s hard obviously, so I panhandle. I try to have a different approach to panhandling by dying my hair and having a British accent. It seems to help!”

While saying goodbye, he picked up his bicycle and struggled to mount it while carrying all of his luggage and other possessions.

There are no easy solutions, with Los Angeles’s homeless population projected to grow to nearly 90,000 by the year 2023. Skid Row remains the largest homeless community in Los Angeles and one of the largest in the United States.