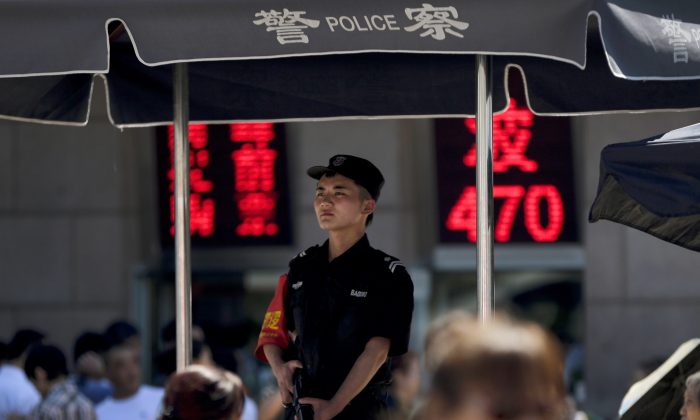 An armed policeman at a police booth at a crowded railway station in Beijing, China, on Sept. 3, 2014. Beijings tight controls and monopoly on the narrative make it difficult to independently assess if the lethal action has been justified. And Chinese authorities prevent most reporting by foreign journalists inside Xinjiang, making it nearly impossible to confirm the state media numbers. (AP Photo/Andy Wong)
China

An Weixing, chief of the anti-terrorism bureau, gave the regime’s rationale for the new law: “In recent years, due to the impact of East Turkestan forces and the activism of international terrorism, the threat of terrorism in China is becoming more and more prominent. Terrorism poses a severe threat to the nation’s safety, social stability, economic development, racial unity, and the safety of the citizen’s life and property.”

One common concern from Western countries is Article 18, which establishes the obligations of technology companies to assist the Ministry of Public Security and the Ministry of National Security in investigating terrorism, including providing technical support and assistance with encryption information.

Western companies fear this law may put them at a regulatory disadvantage and compromise proprietary information.

Before the law was passed by the legislature, the U.S. Department of State expressed concerns over the draft. “We believe the draft Counterterrorism Law would lead to greater restrictions on the exercise of freedoms of expression, association, peaceful assembly, and religion within China,” said Gabrielle Price, a State Department spokeswoman, on Dec. 22.

The Chinese regime has a pattern of attempting to use prominent terror incidents to call attention to what it says are its domestic problems with terrorism, dating back to Sept. 11, 2001. This November, after the terror attack in Paris, the Chinese regime did so again.

“China is also a victim of terrorism,” says Wang Yi, a China diplomat. “Cracking down on the ‘East Turkestan’ terrorist forces” should become “an important component of international counterterrorism.”

The Uyghurs, a minority race in the Xinjiang Autonomous Region in northwestern China, have long been known to have been oppressed by the Chinese Communist Party. Human rights groups say the reference to “East Turkestan terrorist forces” is used to justify that oppression.

While there has been an increase in violent events in Xinjiang, experts say this violence is a reaction to the harsh policies of the Chinese regime.

Human rights activists have feared that the enforcement of the new law could result in new human rights abuses.

In the past three years, hundreds of people have been killed by what the Chinese authorities say are counterterrorism activities, according to Human Rights Watch.

In an attack said to be by 10 suspected Uyghur terrorists, nine were shot dead by security forces, according to The Associated Press. The state mouthpiece Xinhua reported that 323 people died in Xinjiang-related incidents since April of last year, and almost half of the deaths were caused by the police, according to an Associated Press review of Xinhua’s accounts.

“Targeting people for attack is never justified, but committing human rights violations is no way to stop such horrific violence,” said Sophie Richardson, China director at Human Rights Watch, in a January 2015 response to the draft anti-terrorism law. “The Chinese government needs to respect rights, not build a new architecture of surveillance.”