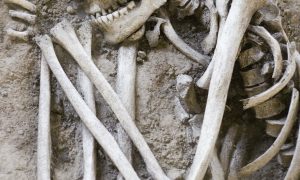 A roughly 1-acre area just outside of Athens is well known to be filled with mass graves, with the first of many being discovered roughly 100 years ago.

Recently, archaeologists came upon another one, and some historians believe it may house the remains of many of the insurgents who aided Olympian and rebel Cylon in his 7th century BC bid to overtake Athens’ government. That time was a troubled one in the city, rife with discontent over inequality and scarce resources. Cylon attempted to rally the people and overtake the city’s leadership, but the coup fell far short of success.

Of the 80 skeletons within the recently found burial site, nearly half were found in shackles. Pottery discovered nearby suggests the burial occurred around the time of the ill-fated takeover effort.

Historical records of the century’s happenings are scarce, leaving the proposal that the buried are the rebel’s followers difficult to investigate. Nonetheless, as the remains are of people believed to hail from lower social classes, the skeletons could provide great insights into the little-discussed regular citizens of the day.