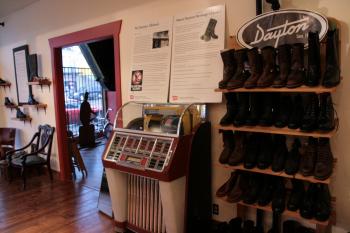 Sixty-three Years on, Storied Boot Company Still One of a Kind

Joan Delaney
Senior Editor, Canadian Edition
Joan Delaney is Senior Editor of the Canadian edition of The Epoch Times based in Toronto. She has been with The Epoch Times in various roles since 2004.
View profile
Follow
biggersmaller
Print
When Stephen Encarnacao learned that Dayton Boots was about to be outsourced to China he didn’t hesitate—he bought out his partners to keep the iconic boot company in Vancouver where it’s been operating since 1946.

“It would have been a tragedy to take such a great brand offshore to China. I mean, it’s synonymous with what’s good and powerful and strong about how this province was built,” says Encarnacao, owner and CEO of Dayton.

The boots, which have a cult following and whose fans include Johnny Depp and Angelina Jolie, come with colourful names such as the Black Beauty, the Engineer, the Sidekick, the Confederate, and the Mustang.

But in these days of built-in obsolescence and mass production, what really makes Daytons a cut above the rest is their quality.

Daytons come with a lifetime warranty and are crafted by hand to exacting standards using the Goodyear weld of construction instead of glue and cardboard. This allows them to be resoled and reconditioned numerous times. It is not uncommon to see Daytons still in use after 40 or 50 years, says Encarnacao.

“In fact, if we have a problem it’s that our boots last too long. It may be the bane of our existence but I don't think we're going to change because it’s what stands us apart.”

There are over 230 steps in making a pair of Daytons—a labour intensive process that only three percent of the world’s bootmakers still use today.

Charlie Wohlford, a Vancouver barkeep and club manager with a reputation for repairing loggers’ boots to a better state than when they were new, started Dayton Boots in 1946.

Loggers across the province were delighted with Wohlford’s durable Dayton 64s and as word spread, Daytons soon became the footwear of choice for not only loggers but also construction workers, roughnecks, and longshoreman as well as fire and police forces.

In 1962, Dayton introduced its western boot—the first to eliminate inside seams in favour of seams on the outside—which helped reduce chafing on the legs of horse riders. By 1965, the availability of better rubber soles led to the production of the Black Beauty double-soled motorcycle boot.

“The Black Beauty was originally a cowboy boot that was built for the Woodward family and their ranch hands, which then crossed over and became a really popular motorcycle boot,” says Encarnacao, formerly a marketing officer at Reebok.

Lore has it that in the early Sixties Dayton-wearers became persona non grata in many of Vancouver’s drinking establishments. The problem was that hard-nosed bikers as well as the odd logger tended to use their Daytons as a stomping weapon in bar fights.

Bar owners soon understood that customers wearing Daytons were an early predictor of potential trouble and made a rule that anyone wearing the sturdy boots was no longer welcome. So for the next 25 years, signs saying “No Daytons Allowed” were posted in bars throughout British Columbia.

Dayton Boots became known south of the border thanks to Danny Sailor, a legendary performer and world champion lumberjack from the Prairies. While wearing his Daytons, Sailor’s act consisted of racing up a 100-foot fir tree, doing handstands, headstands—and sometimes the Charleston—without the benefit of a safety net.

“I put a 12-pound weight on each foot when I’m practicing,” explained Sailor, “and when I take them off I feel like I’m flying.”

In his signature move, Sailor would climb to the top of a 120-foot pole, do a jig, throw his tin hat in the air—and then beat it in a race to the ground. By 1968, Sailor was making $30,000 a year touring American cities with his highflying act. His footwear became a source of much curiosity and Dayton began receiving orders from U.S. loggers.

Dayton also played a role in the 1995 film Jumanji, parts of which were filmed in “Hollywood North.” Then-Dayton president Ray Wohlford served as a consultant and some of the staff played as extras in the film. The design and layout of the fictional Parish Shoe Factory featured in the film was adapted from the Dayton Boot Factory.

The Dayton Boots Showroom, which is attached to the factory on East Hastings, was recently revamped to incorporate floors and furniture made from Douglas fir recycled from the Stanley Park blow-down of December 2006. Photographic essays depicting Dayton’s history along with memorabilia from the '40s and 50s complete the store’s new look.

The impetus for the makeover is the anticipated arrival of thousands of international visitors for the winter Olympics in February. Encarnacao explains that he wanted to use the opportunity to showcase the heritage and authenticity of Dayton Boots “as really one of the places to visit in Vancouver.”

“Vancouver's a lovely city geographically, but in terms of the history and having things that are really indigenous, or local, or truly authentic, we're about it. There have been a couple of other brands that have been around, but as far as making a product that sells in Canada, sells in the U.S., sells in Germany and Japan that has been made continuously here, we're about the only company.”

No doubt Charlie Wahlford would be proud.